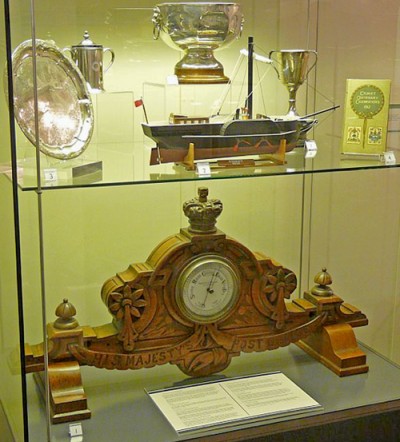 THREE important Henry Bell and the Comet artefacts cannot be seen at present.

They are normally on show in the Linthouse building at the Scottish Maritime Museum in Irvine, but the building is currently being given a new roof. It is hoped to re-open the facility next Easter.

The items are part of the ‘Scotland by Steam’ exhibition in the PS Lochlomond Gallery. The exhibition details the development of passenger and goods shipping in Scotland, from Comet to the present day.

A model of the Comet, Europe’s first successful commercial steamboat  which paved the way for the development of steam travel. The model was built by Brian Goodwin.

This silver-plated tray commemorates the Comet. It is finely engraved with an image of the ship in the centre, surrounded by the portraits of those whose enterprise made steam travel a reality: Henry Bell; John Wood, the Comet's builder; David Napier, the boiler maker; and John Robertson, the maker of the engine.

It was probably produced to mark the centenary of the Comet's maiden voyage which was widely celebrated in 1912. Although the decorative engraving in the centre of the tray is traditional, the metalwork around the edge is clearly influenced by the ‘Glasgow Style’ of Charles Rennie Mackintosh and his contemporaries, a style popular at the beginning of the 20th century.

The year 1912 marked the centenary of the Comet's maiden voyage, and this anniversary was widely celebrated in the Clyde area, with an official delegation being treated to an afternoon cruise onboard PS Columba to view an impressive display of ships at the Tail of the Bank.

Amongst the vessels listed were 11 warships, merchant vessels belonging to 20 different companies, and an assembly of yachts, dredgers and tugs. A public holiday was declared in the Clyde area, with illuminations and fireworks in the coastal towns.