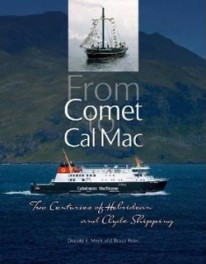 A BOOK which uses Henry Bell's Comet as its starting point, 'From Comet To Cal Mac', was published at the start of 2012, the Comet bicentenary year.

Sub-titled 'Two Centuries of Hebridean & Clyde Shipping', it looks at the development and establishment of what we know now as Caledonian MacBrayne.

The story begins 200 years ago with the pioneering voyage on the Clyde of Europe's first sea-going commercial steam ship, the Comet.

From the elegant paddle steamers of the 19th century to today's modern ferries, the book examines in detail the ships, the companies and the social and cultural changes they helped bring about.

The book is jointly authored by Donald E.Meek, a leading expert on Hebridean culture and a life-long steamer and ferry enthusiast, and Bruce Peter, who is a well-known writer on modern ship design.

It is lavishly illustrated with over 200 illustrations, and is claimed to be a must for anyone interested in the history of steamer services in Scotland and modern short sea shipping in general.

It has produced in A4-style by Ferry Publications, with full colour and black & white photography in its 160 pages. It sells at £24.50.