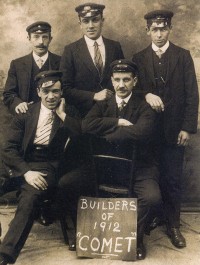 WAS a Comet replica built in 1912, the centenary year?

Helensburgh Heritage Trust director and local historian Alistair McIntyre came across this photograph of a group of five men, ranged round a sign stating "Builders of 1912 Comet".

Alistair and members of the Comet 2012 bicentenary committee had never heard of a replica being built in connection with the centenary celebrations. There was a "Comet" vessel built in 1905, which plied on the Clyde from 1915-1946, mainly as the Lochgoil mail boat.

"I would tend to assume that, if there was one registered vessel with the name, that would rule out any other with the same name, should that have been a possibility," Alistair said.

Could this photo — which Alistair found in Family History Monthly, No.198, in an article on mystery pictures where the sitters have not been identified — perhaps relate to a model built at the time?

He added: "One slightly disconcerting feature of the picture is that one of the men is grinning, which I'd have thought was a bit avant-garde for 1912, although I don't think it's a spoof."