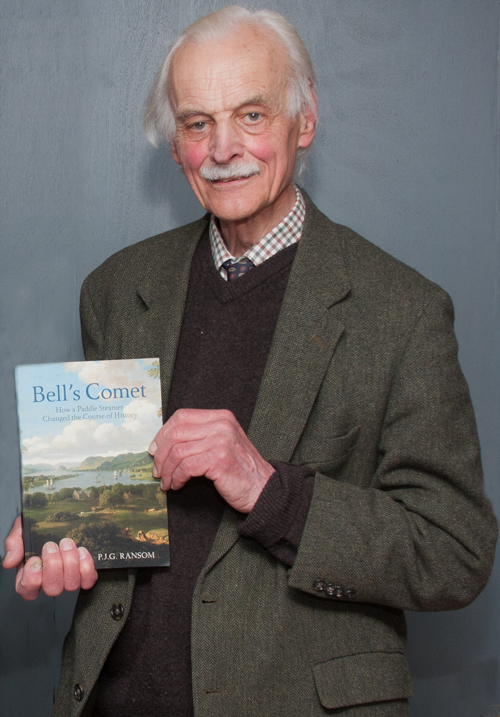 PROLIFIC author P.J.G.Ransom has written a new study of Henry Bell and the Comet and their place in history to mark the 2012 bicentenary — and was launched on Saturday August 11.

He notes that the passenger steamer burst upon the early 19th century with all the suddenness and immediate widespread popularity of e-mail and the internet today. Leading the way was Henry Bell.

When he started to carry passengers down the Clyde in his little steamer Comet in 1812, he established the first viable steamer service in the Old World.

And steamers were the first mechanised passenger transport; no longer were travellers dependent upon people and animals or the fickle effects of winds, tides and currents.

Many had attempted to build and operate steamers, but few had been successful — and they were far away in North America. However once Bell had shown the way, others rushed to follow.

The author also shows that the direct influence of Bell extended more widely than has been generally supposed.

As well as starting steamer services on the Firth of Clyde, he was instrumental in establishing them on the Firth of Forth, the West Coast of Scotland, and along the Caledonian Canal as soon as it opened.

Thomas Telford, engineer of the canal which was the greatest engineering work of the age, referred to him as ‘the ingenious and enterprising Mr Henry Bell’.

An early chapter describes the work of pioneers of steam who provided Bell with the springboard he needed — such as James Watt, William Symington and the Americans John Fitch and Robert Fulton.

Later chapters show how quickly, and how far, steamer services spread around Britain and overseas, leading to a world in which mechanised transport became the norm.

Due credit is given to those who worked with Bell — the engineers John Robertson and David Napier, and the shipbuilder John Wood — and those who worked independently, such as Matthew Murray, James Watt junior, John Rennie and Marc Isambard Brunel.

An appendix outlines where relics of Bell and his work are to be found today.

John Ransom has written 23 other books, mostly on transport subjects. In 2008 his book Iron Road: The Railway in Scotland was shortlisted by the Saltire Society for Scottish History Book of the Year.

He lives in west Perthshire with his wife and dog, and has for many years operated his own steam launch on the lochs and canals of Scotland. His interest in steam also extends to railways, and he is secretary of the Scottish committee of the Heritage Railway Association.

The book is published by Amberley Publishing, price £16.99, and it was launched in the Learning Space at Glasgow's Riverside Museum.