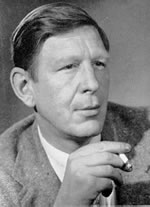 Wystan Hugh Auden was born in York, North Yorkshire, in 1907 as the son of George Augustus Auden, a distinguished physician, and Rosalie (Bicknell) Auden.

Solihull in the West Midlands, where Auden was brought up, remained important to him as a poet.

Auden was educated at St. Edmund's Hindhood and then at Gresham's School, Holt, Norfolk. In 1925 he entered Christ Church, Oxford.

His studies and writing progressed without much success, and he gained a disappointing third-class degree in English. His first collection of poems was rejected by T.S.Eliot at Faber & Faber.

At one time in his undergraduate years he planned to become a biologist. From 1928 to 1929 he lived in Berlin, where he took advantage of the sexually liberal atmosphere, and was introduced to the psychological theories of Homer Lane.

After returning to the United Kingdom, Auden taught at Larchfield from 1930-32, and at Downs School, Colwall, Herefordshire, in 1932-35.

He was a staff member of the GPO Film Unit from 1935-36, making documentaries such as 'Night Mail' (1935). Music for this film was provided by Benjamin Britten, with whom Auden collaborated on the song-cycle 'Our Hunting Fathers' and on the unsuccessful folk-opera 'Paul Bunyan'.

In 1936 Auden travelled in Iceland with Louis MacNeice. Auden believed himself to be of Icelandic descent. From then on he taught and travelled in both Europe and America, and from 1956-61, he was Professor of Poetry at Oxford University.

He is regarded by many as one of the greatest writers of the 20th century. His work is noted for its stylistic and technical achievements, its engagement with moral and political issues, and its variety of tone, form, and content.

The central themes of his poetry are personal love, politics and citizenship, religion and morals, and the relationship between unique human beings and the anonymous, impersonal world of nature.

He died in Vienna in 1973 and was buried in Kirchstetten, where he had owned a farmhouse.