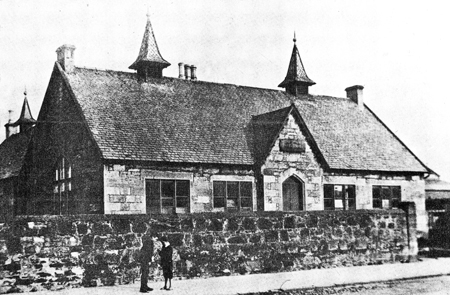 ONE of the town’s early schools rejoiced in the somewhat unflattering name of Helensburgh Ragged School.

It was set up in 1851 to meet the needs of parents who could not, or would not, pay the fees of the other schools of the time . . . and it existed and prospered until the building of Clyde Street School early in the 20th century.

Helensburgh Heritage Trust director Alistair McIntyre researched the Ragged School and came up with some fascinating detail about it and its long-term head teacher George Mair.

Much of it comes from ‘The Story of Helensburgh’, written by long serving Town Clerk George MacLachlan about 1894. He was involved as secretary to the school’s management committee.

He recorded that there was plenty of fee-paying provision for the educational needs of the burgh community, but the poor and the indifferent did not take advantage of this. “They were a source of anxious concern for some years,” he wrote.

The good people of the town decided that this situation was not acceptable, and a group resolved to set up a school which was not a charity but which had sufficiently low fees that every parent could pay for the education without difficulty.

Among this group were Mrs Ewing, of Torwood, Miss Foote, of Rosebank, Miss Kidston, of Ferniegair, William Drysdale, Thomas McMicking and Robert D.Orr.

Mr MacLachlan writes: “A number of subscribers guaranteed a sum to cover the teacher’s salary, and Mr George Mair was installed teacher. The school was opened in a room above the old town hall, with about 50 children, in 1851.”

Next the subscribers obtained a loan from the Government, and in 1853 they acquired three lots of ground from Sir James Colquhoun at the corner of Grant Street and East Princes Street. The school was erected as an L-shaped stone building, containing high-ceilinged classrooms, with the address of 11 Grant Street.

Alistair McIntyre comments: “The choice of the name Ragged School may shock us from a 21st century perspective, but for better or worse it was the name used, even in official documents.

“The term was not of course confined to Helensburgh as it was a British-wide concept dating from around the start of Queen Victoria’s reign. It is very difficult, and probably impossible, to judge to what extent, if any, parents and children involved resented or felt humiliated by the name.”

In any case the school went from strength to strength, with the number of pupils rising as high as 400. As a result the building was extended on several occasions.

The 1872 Education (Scotland) Act made education compulsory for children aged 5-13, and this led to most schools being put under state control. So Helensburgh Ragged School, also known as the Industrial School, became Grant Street Public School.

By 1882 there were two assistant teachers, James Dunn and Miss Buchanan, while Miss Brash taught the infants, and sixteen years later Mr Mair retired after 47 years as head. He was succeeded by London University graduate James A.Crabbe.

The impressive Alexander Nisbet Paterson-designed Clyde Street School opened in 1903, and this spelt the end of Grant Street Public School. The site was later used for an expansion of the town gasworks.

By far its most outstanding former pupil was eminent Harley Street physician then successful author A.J.Cronin, creator of Dr Finlay of Casebook fame, but he is known to have hated his Helensburgh schooldays.

It had not been the only school in Grant Street. Around 1880 the St Joseph’s Chapel School was opened at 48 Grant Street beside the original St Joseph’s Church, and, being Roman Catholic, was not subject to the state control introduced in 1872. It existed on that site until the 1930s, then moved to West King Street and later to Old Luss Road.

Mr Mair, an Ayrshireman, is reckoned to have taught 4,644 burgh pupils, and also conducted an evening class for 21 years which was attended by 1,350 scholars, as they were termed. He was an elder of St Columba Church for 53 years, session clerk for some of that time, and also conducted a bible class.

Parents of three daughters and two sons, he and his wife lived at Galloway Cottage, Colquhoun Street. He was a Fellow of the Educational Institute of Scotland, and in his spare time enjoyed bowling and curling.

He died in January 1916 at the age of 86, and is buried in Helensburgh Cemetery.