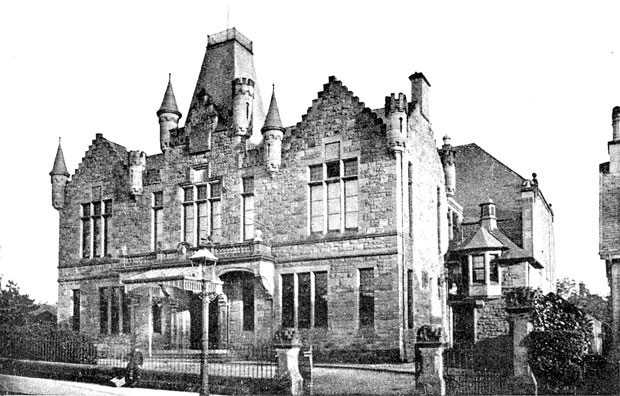 DURING its 200 years as a town, Helensburgh has had a number or private schools, particularly for nursery age children. One not so well known was Miss Ottman's School.

Edinburgh man Robert Whitton, who has researched the school, unearthed much of the Ottman family tree.

He has discovered that Miss Ottman — Phyllis Elizabeth Ottmann — was the second youngest of five children born to Hugo Ottmann who was born in Germany in 1846 and died in 1906.

An iron ore and esparto grass merchant, on February 3 1880 in Clapham, London, he married Mary Greer Macdonald, who was born Glasgow on December 22-1857 and died in 1922 at 144 West King Street, Helensburgh.

The daughter of timber merchant Alexander Macdonald and his wife, Amelia Jane Greer, Mary had three sisters and one brother.

The spelling of the family name varied but they may have dropped the second ‘m’ because of the German connection.

Their eldest child was Amelia Greer Ottmann, born on March 19 1881 in Cathcart.

She was the secretary of the Woman’s United Service Club at 12 Drumsheugh Gardens, Edinburgh, and died on February 26 1935.

Next in line was Leah Greer Ottmann, who was born on August 27 1884 at 11 Lillybank Gardens, Hillhead.

The proprietor of the school, Phyllis Elizabeth Ottmann, was born in Glasgow on March 23 1896 and died in the burgh in 1975.

The family seems to have had a home in Glasgow in 1901 at 5 Windsor Quadrant in Govan and at Annachmore, Rosneath, from 1891, and at Arisaig, Craigendoran, in 1911 after her father died in 1906.

In 1912 Miss Ottmann was at Hermitage School where she gained her School Leaving Certificate, then in 1929 she was at the Royal Victoria Patriotic School, Wandsworth Common, London, where presumably she was a teacher.

There was also a son, Richard Henry Ottmann who was born in Glasgow in 1902 and who died on November 22 1963 in Willow Cottage, Carrbridge, Inverness. He went to Larchfield in about 1915.

He was a railway worker and in due course was divorced from his wife, Catherine Grace Rose Macdonald whom he married in 1933 at Duthill, near Carrbridge.

The Helensburgh Directory for 1939 lists Miss Ottman’s School as in the Victoria Hall in Sinclair Street (pictured), with her home at 38 West Princes Street. Pre-World War Two, the school was probably in her home, but when war broke out a lot of activities were moved to the Victoria Hall.

After the war the school returned to her flat, and a fascinating account of it was penned by a former pupil, Sheriff Simon Pender.

I was a pupil at Miss Ottman’s School, from when I was four years old until I was seven, when I went to Larchfield School, as were my two younger brothers, Patrick and Martin.

At the time I lived in Craigendoran. I would usually be driven to the school, which was in Miss Ottman’s home, a first-floor flat overlooking Colquhoun Square, immediately above what is now Anne of Loudonville’s shop.

I remember on one occasion getting a ride to school on the back of a bike ridden by the boy who lived next door to us, Alastair Martin, who was a few years older, and cycled to the school he attended. We did not get far, since someone threw a snowball at us, causing the bike to skid, as a result of which we both fell off.

Miss Ottman’s school had a maximum of twelve pupils, the schoolroom being the front room of her flat. I remember rows of old-fashioned desks.

My best friend at the school was a boy called Colin Kinnear, who lived in what is now the Rosslea Hall Hotel in Rhu.

I recall that the room had an opaque glass light bowl hanging from the middle of the ceiling, into which, when being mischievous, we would throw such things as banana skins when not being watched, which must have been very irritating for our teacher.

My brother Martin’s best pal had the dubious distinction of being, we think, the only pupil to be expelled from the school. He has gone on to forge a successful career in the City of London.

Martin and I both remember Miss Ottman as an extremely nice and kindly person, who was an outstanding teacher.

I recall learning, under her tuition, to read and write, and to do arithmetic, very quickly indeed, and thoroughly enjoying doing so. I am sure she gave us the best start in our education we could possibly have had.

I remember her being very keen on the Royal Family — she would always keep us up to date with what was going on with the Royals, particularly Prince Charles and Princess Anne, who were only slightly older than we were.

A highlight of each year was being allowed to crowd round the window overlooking Colquhoun Square in December to watch the Christmas tree being erected, decorated and lit up in the corner of the square beside the church. Happy days!