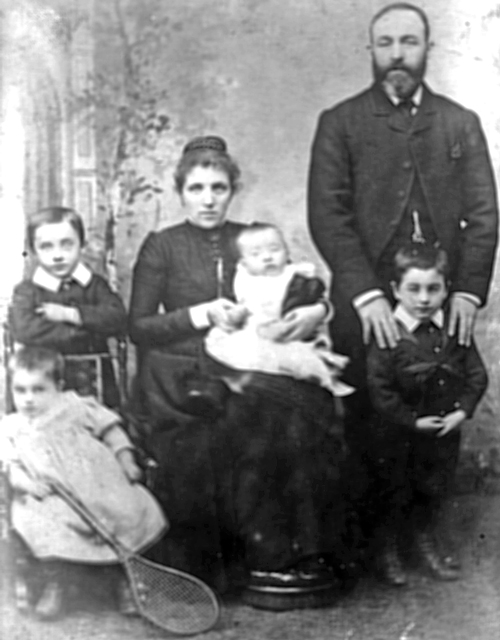 INFORMATION about the boys training ships Cumberland and Empress which were moored in the Gareloch is quite plentiful . . . but another strand of the story came to light in the autumn of 2014.

It links the two vessels, as it is the story of a ‘boy’ who was trained on the Cumberland and returned to be a member of the staff on board the Empress.

Training ships were a way of life — and a hard one — in the Gareloch from 1869 for 54 years. But Helensburgh and Rhu benefitted in various ways from the two former sailing ships moored off Kidston Point and the boys who lived on them.

The first was HMS Cumberland, after which Cumberland Avenue in Helensburgh and the much older Cumberland Terrace in Rhu were named.

Cumberland Terrace is a two storey building like a row of cottages, built in 1871 and owned at one time by the Clyde Industrial Training Ship Association for commissioned and non-commissioned officer accommodation and to provide a small hospital, and now all privately owned.

The Cumberland, built in 1842 at Chatham, was a 2,214-ton two-deck 70-gun man o'war, 180 feet long, with three masts, and had a crew of up to 620 men. In 1869 she was taken over for use as a training vessel by the newly formed Clyde Industrial Training Ship Association.

The Association had the object of providing for the education and training of boys who, through poverty, parental neglect, or any other cause, were destitute, homeless, or in danger from association with vice or crime.

In 1889, the Cumberland was destroyed by a fire, allegedly arson by five of the boys, sold at auction at Robert McTear Auctioneers in Glasgow for £1,770 for scrap, and replaced by the Empress, a wooden battleship originally known as HMS Revenge.

Among the Assocation’s directors was shipowner Sir William Raeburn, the first Baronet of Helensburgh, and among its patrons were the Duke of Hamilton, the Duke of Montrose, the Earl of Home, and the Marquis of Ailsa.

James McDonald was the Cumberland pupil and the Empress teacher — when he lived at Cumberland Terrace with his family (pictured top right circa 1897-8).

His great grandson, Robert Pool, a keen researcher of the West of Scotland’s past and collector of historic items, said: “James McDonald was born in 1865 to Margaret McDonald and his father was, reputed to be James Downie.

“I found this entry on his birth certificate quite unusual as normally with unmarried mothers the entry would have stated that the child was illegitimate. I can only guess that it was common knowledge that the couple were to marry and that James Downie had died.

“It would have taken the consent of James Downie's parent to authorise his name to be on the birth certificate under these circumstances.

“I believe that, having no father and seen to be a vulnerable member of society, James was taken as a boy into the care of the Training Ship programme.”

James enjoyed his time on board the Cumberland and excelled as a pupil. 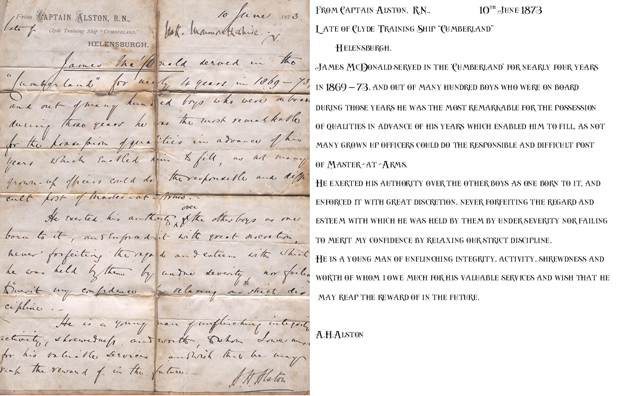 A reference letter from Captain A.H.Alston RN, the captain, handwritten on June 10 1873, stated: “James McDonald served in the ‘Cumberland’ for nearly four years in 1869-73.

“And out of many hundred boys who were on board during those years he was the most remarkable for the possession of qualities in advance of his years which enabled him to fill, as not many grown up officers could do, the responsible and difficult post of Master-at-Arms.

“He exerted his authority over the other boys as one born to it, and enforced it with great discretion, never forfeiting the regard and esteem with which he was held by them by under severity nor failing to merit my confidence by relaxing our strict discipline.

“He is a young man of unflinching integrity, activity, shrewdness and worth, of whom I owe much for his valuable services and wish that he may reap the reward of in the future.”

James became a seaman in the Merchant Navy, and married book folder Jessie Montgomery on September 21 1883 at 17 Westercraigs, Dennistoun, Glasgow. 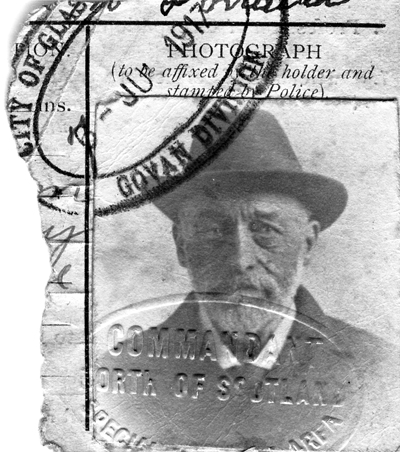 The 1891 census shows that James was working on board the CTS Empress as a steward and cook, and the couple had three sons and four daughters.

Robert said: ”My grandmother, Jane Montgomery McDonald, was born at Cumberland Terrace in Rhu in 1894 and more than likely attended one of the local schools. She is the three year-old girl holding the tennis racket in the group photograph.

"William is sitting on Jessie's lap, and the boys are Thomas and John. Missing from the photo are James Jnr., David, Margaret and Annie."

David Dickson McDonald, who was born 1891-2, accidentally drowned in the River Tembi, Iran, while working for the Anglo Persian Oil Company in 1925.

In 1900 James, still living in Cumberland Terrace, bought a lair in Rhu Churchyard, and in the 1911 census he is listed as still a cook and steward on the Empress, aged 56, married, and born in Stornoway.

However by the time of his daughter Jane’s marriage in January 1918 the family had moved to Glasgow’s Gallowgate, and James was working as a wartime shipyard labourer.

Efforts to find out when James died, and whether he is buried in Rhu Churchyard, have failed so far.