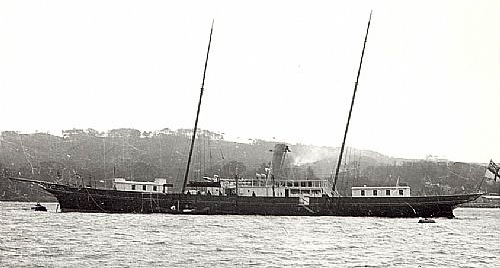 FOR A few months in the spring and early summer of 1913, inhabitants of Rhu would have seen a handsome vessel moored there, not far from the wooden bulk of the training ship HMS Empress.

This newcomer, the steam yacht Vivid, was also a training vessel, though of a rather different stamp.

She represented the legacy of the centenary celebrations for Henry Bell’s Comet, as well as an attempt by the mighty but beleaguered Clydeside shipping industry to maintain a lead over its international competitors.

In the event, this attempt was to come to little: the Vivid was to sink, a little less than a day into her maiden training cruise, and less than a year after the Comet pageant.

Although there was agreement that the Comet celebrations should leave some tangible legacy, the form it should take was disputed.

Professor Biles, the chair of naval architecture at the University of Glasgow, originally proposed building a replica of the original Comet.

After much wrangling between various civic institutions, this metamorphosed into a scheme to provide scholarships and a training vessel, both based in the School of Navigation at the Royal Technical College in Glasgow — the same “extremely efficient national institute” where John Logie Baird was at that time acquiring his engineering education.

The scheme was motivated by a perception that British seamanship training was stuck in the age of sail; no nautical college offered its cadets training on board a steamship, and the proponents argued that the scheme would also appeal to parents who wanted to secure their sons a professional apprenticeship but without foregoing the engineering education provided by the College.

Funding was to be raised by public subscription, but despite vigorous lobbying and publicity campaigns, support was not enthusiastic. The city fathers of Glasgow also tried to blandish the Admiralty into providing a surplus naval vessel for free, but this was unsuccessful, and eventually the College paid £1,800 for the 400-ton steam yacht Vivid.

The Vivid, under her original name of the Capercailzie, was built in 1883 for the shipping magnate John Burns, later Lord Inverclyde. After eight years in his possession, she was sold to the Admiralty and served as the Commander’s yacht at the Royal Naval base at Devonport until she was purchased by the College in 1912.

As a training vessel, she was fitted out in a genteel style that accorded with her background and her owners’ ambitions, and must have made a strong contrast with the basic facilities and naval discipline aboard the Empress — she even carried a piano!

Needless to say, the Vivid’s purpose was very explicitly to train “lads destined to become officers in the Mercantile Marine”.

It is not clear why she was headquartered at Rhu; this may simply have been because it possessed a small steamboat quay, but it is also possible that the Empress had established Rhu as a suitable base for maritime training — the projects shared at least one active organiser, the industrialist and yachtsman William Chrystal.

Despite the care that was lavished on the Vivid, fewer cadets were recruited than had been hoped, and when she eventually set out on her first cruise on Monday July 7 1913, she carried a mixture of cadets from the School of Navigation and school teachers from coastal towns on the Forth and Clyde.

Her route was to take her to Stornoway, where she would collect a further party of teachers, before proceeding round the north and east coasts of Scotland on an instructional cruise.

In the event, she made it no further than the passage between Islay and Oronsay. There, in the small hours of the Tuesday morning, she ran aground in a calm sea on a rock that her captain would later claim had not been marked on any chart.

The teachers were promptly bundled into a lifeboat and dispatched to Colonsay; the crew and cadets, together with two vessels that came to their assistance, struggled unsuccessfully to save the Vivid, and she sank while under tow a mile to the north of Islay.

No lives were lost, and the Herald’s reports give the impression that the cadets found the experience more exciting than terrifying — unlike the teachers, whose “experience had proved so upsetting that they preferred not to face the long sea trip back but to take the shorter voyage to Oban” and return to Glasgow by rail.

The shipwreck was an embarrassment to the Technical College, whose internal inquiry was as swift and as quiet as possible, and who must have been glad that the Board of Trade felt no need to investigate further.

In the long run, some of the governors may even have felt they had been relieved of a floating white elephant.

The effect on Captain Beavan, the master of the Vivid, was more devastating; although he was never formally censured for the incident, he seems to have had great difficulty finding work elsewhere, even during the maritime mobilisation of the First World War.

Although Rhu can hardly have had the happiest of associations for him, it continued to be his address, and when he died in 1924 his widow Sarah was still living at Greenside, Row.

The Vivid’s story leaves several unanswered questions and might have beens. Where exactly was the rock she struck, and why did this happen? Did a moment of careless navigation — or a mysteriously uncharted hazard — deal a blow to Clydeside shipping’s attempt to maintain its global status?

Or do the problems raising funds suggest that, even during the Comet celebrations, this industry was faltering in confidence?

A century later, during another time of economic anxiety, the story also provides a poignant reminder that the Clyde’s history is composed as much of enterprises like the Vivid that failed and are almost forgotten as of those like the Comet that are celebrated today.