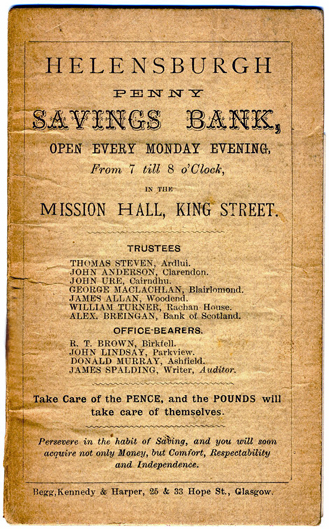 Back in 1895, the bank opened every Monday from 7-8 p.m. in the Mission Hall in King Street. Its officebearers were R.T.Brown, Birkfell; John Lindsay, Parkview; Donald Murray, Ashfield; and James Spalding, Writer and Auditor.

Its trustees included flour merchant and former Lord Provost of Glasgow John Ure, of Cairndhu, town clerk George Maclachlan of Blairlomond, and Alexander Breingan (above left) of the Bank of Scotland.

Mr Breingan was a local dignitary and Provost from 1863-69. He was the first captain of Helensburgh Golf Club and in 1894 presented the Breingan Medal which is contested annually by the members to this day.

The bank book notes that ‘the hand of the diligent maketh rich', and exhorted: "SAVE Money - Many prosperous men have acknowledged that their success in life began with their joining the Savings Bank."