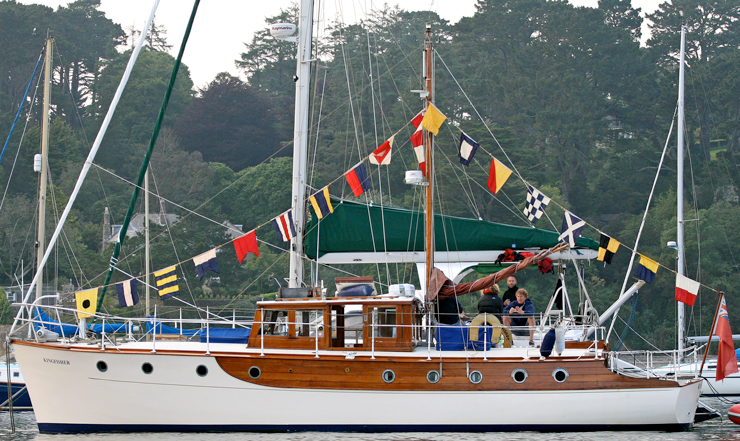 A PIONEER of British motorboating lived and worked for many years in Rosneath.

In nautical circles designer John Bain is revered, and many of the vessels he designed are still in use and in great demand today.

Glasgow-born, the son of a Scottish designer and builder of model yachts, Bain was the first in the UK to develop a production line of boatbuilding and a line of stock boats.

His designs were considered elegant and seemingly timeless, exceptionally built from the finest materials, resulting in capable and very seaworthy vessels.

Much of this happened during over 40 years at the James A.Silver Ltd. boatyard on the shore of the Gareloch.

According to the Silvers Marine website, the first evidence of a boatyard at the site can be traced back to the early 1880s.

The yard was established by local boatbuilder Peter R.McLean, and James A.Silver, son of a local shop owner, began his apprenticeship as a boatbuilder there.

After serving his apprenticeship, James Silver left the yard before McLean sold it in 1906, and he set up business with his brother and John A.McCallum, a well-known Clyde designer.

They built their first motor yacht in a yard in Glasgow. The partnership worked well and the yacht was a great success.

When the yard at Rosneath came up for sale again James Silver took it over and rapidly built a reputation for high quality motor and motor-sailing yachts. The first Silver yacht rolled down the slipway at Rosneath in 1910.

Silvers yachts were a great success, but James was a poor businessman and the yard fell into financial difficulties. He sold the yard to a syndicate and stayed on for a couple of years as manager 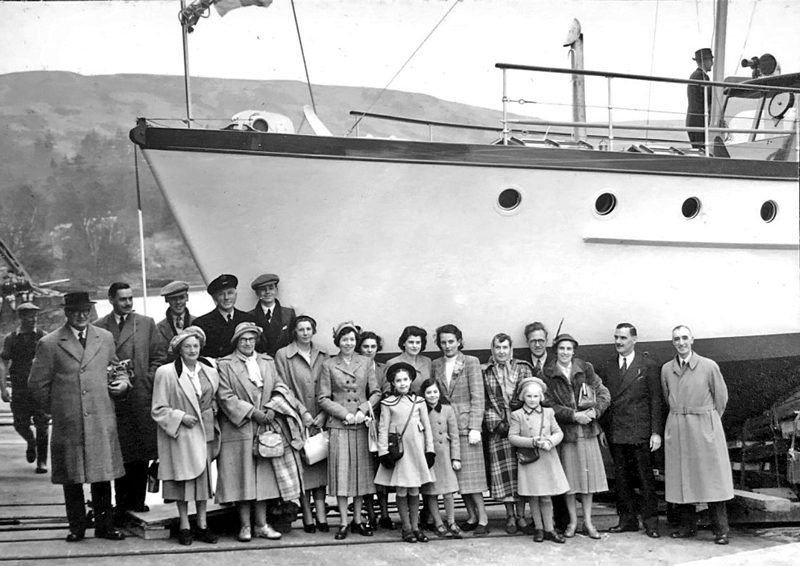 In 1916 he left, and the syndicate approached John Bain, who had worked there as a designer for two years, to take over the management of the yard.

He was a shrewd manager and this partnership brought the yard renown and prosperity for many years.

Bain learned the principles of yacht design first from his father and later at evening classes he attended at the Royal Technical College in Glasgow, now part of Strathclyde University, while he was an apprentice at a joinery firm.

Much of what follows comes from classic yacht consultant Iain McAllister, a Helensburgh man, who researched for a profile by Piero Maria Gibeilini in ‘The Encyclopedia of Yacht Designers’, published by Norton in New York in 2006.

When Bain became yard manager, it was a difficult period for the yard because of the onset of World War One. He designed small craft and utility craft for the war effort.

The first motor yacht designed by Bain at Silver’s was launched in 1919. A speculative build, the 23-foot 6-inch Maple Leaf served to establish a production run of these yachts, afterward known as the Maple Leaf class.

Essentially a motor yacht in miniature, with low fuel consumption, the design proved successful, and between 1919 and 1921 at least six or more were built. Their success led to orders for several more custom-designed boats.

In 1928 the yard launched the 42-foot Brown Owl, a twin-screw motor yacht with a canoe stern, which represented another stock Bain design. This class was produced until the mid-1930s, in 42, 47, and 52-foot versions.

Under Bain’s direction, Silver’s became the first yard in Britain to utilise a form of production line, successfully reducing labour costs and broadening the marketability of the boats, even as the company acquired a reputation for its high quality and disciplined approach.

When the Great Depression began in the 1930s, Bain introduced the Silverette, a new class of small powerboats built at low cost for a wider market. The 30-footer made a success of the yard and made John Bain famous. A 36 foot version was soon offered.

The 60-foot Westwind was launched in June 1930 and incorporated many innovative features which appeared in later Bain designs.

Aiming for a seaworthy yacht capable of 14 knots, he lightened the displacement, created a new underwater shape, introduced a low-drag, unsupported spade rudder, and designed a distinctive elliptical stern that came to be known as the Bain stern.

This design contributed elements to the popular Silver Leaf class, produced from 1932 to 1951 and ranging from 42 to 52 feet in length. By the mid-1930s Silver’s had become the most productive and respected motor yacht builder in Britain.

A few sailing boats were designed and built in the 1930s, and in 1939 the yard began producing motor sailing yachts.

During World War Two Bain contributed to the war effort by assembling and fitting out pre-fabricated ‘Fairmile’ gunboats and motor torpedo boats, ranging from 100 to 120 feet, along with harbour launches, dinghies, and naval cutters.

Because of Bain’s careful hoarding of leftover teak from these projects, Silver’s was one of the few yards able to offer teak hulls immediately after the war.

Many boats he designed were involved in the Dunkirk evacuation, including the Brown Owls Wairokei, Wairakeill, and Moiena; the Silverette White Orchid; and the 80-foot Conidaw, which alone rescued over 900 men from the beaches.

Besides Conidaw, Bain designed other large custom yachts, such as the 72-foot Silver Fox, built in 1937, and the Red Pirate of 1948.

Silver Fox, like the Brown Owl class, had a canoe stern and heavy displacement, whereas Red Pirate was an evolution of the Westwind design, with a shallow hull and the Bain stern.

By the mid 1950s Bain had fallen ill, and ill health forced him to give up the management of the yard in 1957.

Bain also designed for other yards. He drew a 40-footer for Anderson in 1947 and designed the 62-foot Joanne of Garth for A.M.Dickie and Sons in 1953. His collaboration with Dickie and Sons continued for several years.

Until the 1970s, his designs were also used by other important yards in the United Kingdom, such as R.A.Newman of Poole and James N.Miller and Sons of Saint Monance.

From 1959 to 1963 Miller launched various yachts designed by Bain, ranging from the 58-foot Sea Crest to the 73-foot Wild Venture.

Over his long career, he produced more than 500 designs, and in Britain he is considered the father of the family-owned and operated power yacht.

With their elegant and timeless appearance, good seakeeping ability, high-quality materials, and precise construction, surviving examples are sought after.Many are still in use around Britain, in the Mediterranean, and in U.S. waters.

Bain, who lived in Seafield Cottage beside the yard while working there, was also an excellent teacher. His evening classes in the Rosneath village school were attended by apprentices from many boatyards because of his reputation for preparing first-class workmen.

He played an important part in the life of St Modan’s Parish Church and donated a Communion table for the Memorial Chapel.

In 1930 he wrote the illustrated book ‘Motor Yacht Building by John Bain A.M.I.N.A.’, published by James A.Silver Ltd. In a chapter entitled ‘The Call of the Sea’, he explained his philosophy.

“As a nation the sea has an irresistible appeal to all of us: the salt is in our blood,” he wrote. “The reasons why and the method in which we take to motor cruising are many and varied.

“A ship, it has been suggested, is the subject next in order to women and love which has chiefly inspired the poets throughout the ages — is there any wonder that men today yearn to possess a motor cruiser of their own!

“Briefly, the peculiar charm of motor cruising is in the fact that for most people it is a complete change from everyday life, amid new scenery and surroundings. It can be either an expensive or economical sport, just as one chooses.

“One man’s idea may be to do everything himself from the navigation to the cooking; another may wish for a large crew and all the amenities and comforts of life ashore.”

Such was the great respect people held for John Bain that following his death at the age of 91, numerous representatives from many of the most important yards in Scotland attended his funeral.

John Boyd, later a Cove and Kilcreggan town councillor, took over from Bain, and under him the yard continued to build luxury motor yachts, and went from strength to strength.

But the 1960s saw the turnover vastly reduced, and in 1970 it went into voluntary liquidation. During the late part of 1970 and 1976 it was owned by two successive owners, but little work was done.

In late 1976 the yard was bought by D.M.Russell and renamed D.M.Russell Ltd. The sole aim of the new owner was to restore the yard to its former glory, but after building several Jura Class motor sailers the business failed and the yard went into receivership in 1982.

It was bought in 1983 by the Arthur Duthie group and renamed Silvers Marine Ltd. The yard has undergone a period of redevelopment and reorganisation and now operates as a high standard maintenance and storage facility.