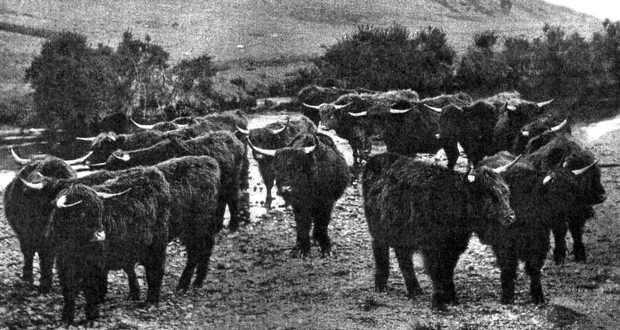 THE CARMAN Cattle Fair was a major local event which during the 19th century grew to become the most important of its kind in the West of Scotland.

Horses and sheep attracted the public, but it was the sale of cattle that predominated at the Carman event, held annually on the first Wednesday in June.

Thanks to research by author and local historian John Mitchell, the origin of Carman Fair is known.

The minute of a meeting of Dumbarton Town Council in 1762 records that a lawyer, representing a consortium of graziers, petitioned to set up a cattle market on the town’s moor.

This was agreed, on condition that the animals should approach by way of Dumbarton. This stipulation stemmed from the council’s policy of placing a levy on passing livestock, the proceeds being used for much-needed flood protection work.

The fair took place as planned, but perhaps almost inevitably, the levy meant that the cattle men soon found ways and means of shifting the location to avoid paying the town dues.

There were several subsequent changes to the location, but around 1821 it was decided to switch the event to Carman Hill, although it was still sometimes referred to as the Dumbarton Moor Fair.

The Carman event should not be confused with a time-honoured annual cattle market held in Dumbarton.

This general vicinity was well placed geographically both to field cattle coming from the South West Highlands, and at the same time meet the demand for beef in the expanding population centres of the Central Belt. 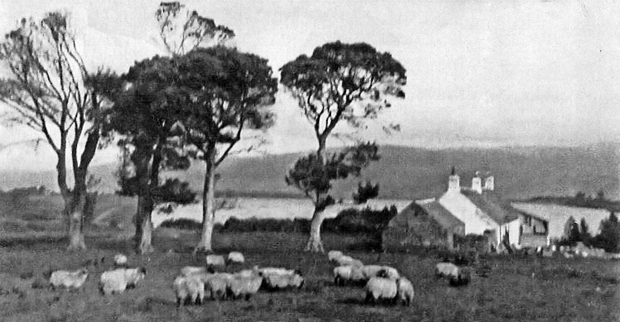 The cattle fair at Carman went from strength to strength. Success bred success, and not only were huge numbers of cattle sold at the event — reckoned to be up to 10,000 beasts — but in addition, many stalls and other attractions lured the general public from far and wide.

So popular did the fair become that special excursions were laid on from Glasgow, the trippers often arriving by a combination of steamboat and rail.

A good many people from Helensburgh and district would have attended, made all the easier with the coming of the railway in 1858.

Not all local people would have attended purely for the social side, as a number of the bigger farmers were always on the lookout for suitable cattle to add to their own portfolio.

Large numbers of cattle never reached Carman, with droves being intercepted and deals struck on route.

An article published in the Helensburgh and Gareloch Times on July 21 1897 paints a graphic picture of Carman Fair in its prime, some twenty years earlier.

It reads . . . “The assembled herds lay stretched out from the moor at Kilmahew estate all the way to the cultivated fields in the lower valley of the Leven.

“For a week or more before the first Wednesday in June, herd after herd began to pour along the roads.

“The atmosphere was burdened by two languages, Gaelic predominating. Schools had a holiday on the day.

“On Tuesday evening, all the lads and lassies from the Vale attended, as they had no holiday on the day. Till a late hour, there was singing and dancing, daffing and chaffing, all making for a gay scene.

“The ever restless cattle, the shouting of herdsmen, the barking of collie dogs, and the arrival and departure of beasts, for buying and selling had already started, made the scene a memorable one.

“On Wednesday morning, a different scene emerged. The horses had arrived, and were arranged in long rows below the solitary house on the moor. Fine animals were there, with tall prices. A great stir the horses made, as they raced up and down to show their paces.

“Bulls were a terror to the crowds, and were given a wide berth. Sheep and lambs were there too, while cattle made the place black.

“But to the holiday-makers, the special charm lay in the booths and stands, where the 3-card trick or the nimble pea lured the unwary, or a fortune was to be made by placing a penny on the crown and feathers.

“A huge canvas tent provided refreshments. The beer was often so thick from the jolting it received on the journey up the hill, that according to the bartender, it was ‘both meat and drink’.”

The picture painted by the article is of a bustling, but good-natured crowd. Unfortunately, this was not always the case.

The heady mixture of the crowds, the availability of strong drink, and the possible presence of different factions meant that trouble could quickly flare up.

In 1856, there was serious disorder, when the shipwrights of Dumbarton clashed with Irish navvies working on the railway.

Feuding is said to have continued for months after the fair itself. There were not infrequent brawls featuring rival groups of young men, such as between the Dumbarton shipwrights and print workers from the textile mills.

Occasionally there could even be trouble between drovers and others, as happened at least once outside lodging-houses in Renton, when some drovers clashed with workers from the local textile factories.

One of the most unsavoury incidents took place in 1864, when a mob of around 100, mainly ships carpenters from Dumbarton, attacked the animals with sticks and stones.

The ringleader was arrested with difficulty, and several policemen were injured in the melee. Eventually, prison sentences were handed down to five people for mobbing and rioting.

With the main business of cattle dealings complete, the scene now centred on Renton.

The article from the Helensburgh and Gareloch Times continues:

“By 5pm, the moor was deserted. At Renton, the streets leading to the railway station were packed with cattle. At the station were scores of men, who, with camp-follower boys, lashed the cattle up ramps and on to the trucks.

“All day long, two powerful locomotives had been in attendance, shunting, and train after train loaded with cattle, horses and sheep departed for all parts of England, Scotland and Wales.

“Not until 10pm was the last shivering stot (young bull) hammered in. By that time, penny reels with ‘hooching’ were in full swing — the night was obviously not for slumber.”

The writer of the article obviously sensed that this once notable event had now reached the end of the road, as he concluded: “Now all that is gone. In 1897, only one ‘miserable herd’ of 100 Highland cattle arrived, along with a few horses, but there were no takers.”

This evaluation proved all too true. So what led to the demise of Carman Fair? A clue lies in the reliance on the railway to transport the livestock from Renton.

As the rail network continued to develop, reaching as far as Oban in 1880 and Fort William in 1894, it cut out the need to drive the animals in the traditional way.

In addition, animals could swiftly be brought to the railways from all sorts of outlying places through the ever larger and faster steamboats plying the West Coast.

As far back as the 1830s, some cattle were already being carried from some of the islands by boat. The new ease of travel also meant that the cattle dealers themselves could travel almost anywhere and buy beasts direct from the farmers.

Other factors also conspired to bring the world of droving to its knees. As modern agricultural practices developed, came walls, fences and other impediments to the free movement of animals across country.

Charges for overnight grazing, development of modern roads and the traffic they generated —as well as the payment of tolls — all spelled the end of droving and the need for events like the Carman Fair.

Even the mammoth Falkirk Tryst, the largest cattle fair in Scotland, did not survive the First World War. In their day, however, droving and cattle fairs formed a key feature of rural Scottish life.

Old pictures depict a shepherd’s cottage adjacent to the market-place, but now only a few mortared stones hint at its presence. The shepherd was astute enough to obtain a licence to sell drink at the time of the fair, and allegedly did a roaring trade.

One feature that does survive today is a group of large sycamore trees, and a poignant touch is the presence on their trunks of many small plaques which commemorate various local folk who have passed away. The site means a lot to some people.

Drovers were a tough, but enterprising and resourceful breed of men, who played a key role in acting as middlemen between the farmers and potential buyers of beef.

They needed to be honest and dependable — farmers had to trust that they would take their livestock safely to the market-place, see to their sale, and bring back the proceeds as swiftly as possible.

The drovers also required to be resilient. Even with the best of care, things could easily go disastrously wrong when factors beyond their control came into play, and both drover and farmer could face ruin.

The work could be dangerous, too, especially in earlier times, and it is significant that drovers were exempted from the Disarming Acts of the 18th century.

Their stock in trade was a breed of small horned black cattle not found today, weighing as little as about 5cwt and known as Kyloes. Only in the twilight years of the trade did larger breeds of varying colours begin to make their appearance. 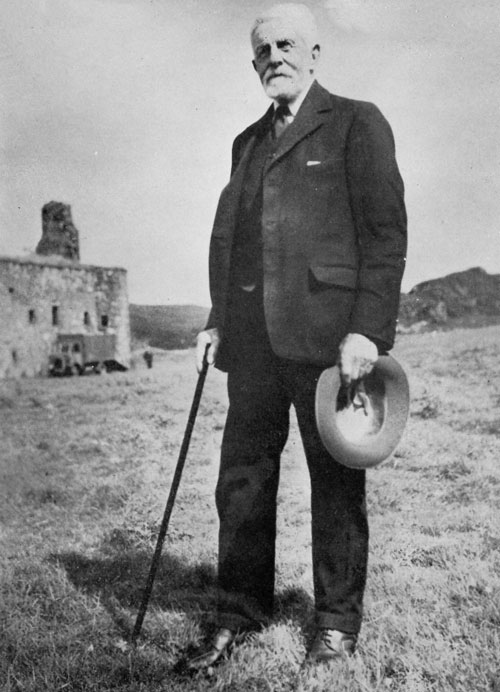 One of them, Dugald MacDougall, 1866-1957, (right) was interviewed extensively by outstanding social historian Eric Cregeen shortly before Dugald's death. Described by Cregeen as the last of the true drovers, his reminiscences form a unique and perceptive archive of a way of life on the verge of disappearance

Dugald was born in 1866 in his homeland of mid-Argyll near Lochgilphead, and his account offers useful insight as to the sorts of considerations that could influence the route taken on a particular drove. Thus, on occasion, his drove spent the night at Stronafyne, Arrochar, where the farmer was from a well-known family of MacFarlanes.

There were good facilities at the farm for feeding and resting the cattle in a secure compound. The next day's stage took the herd above Loch Long, and down to Faslane, where MacFarlane's brother had a large farm.

Given that this was in the twilight years of the droving trade, knowledge of such suitable staging posts would have been especially vital, with constraints imposed by the modern world increasingly restricting the choice of route. The MacFarlane brothers both ran very large farms, often trading in cattle, and it could have been mutually expedient to bring droves their way.

While most of Dugald's work meant that his ultimate destination was normally Falkirk Tryst, he did recall attending Carman on one occasion: “I was at that fair once, and there was only one house, a shepherd's house, up there. And on the market day, the shepherd got a licence: he could sell spirits to the dealers, or them that came with the cattle . . .”

The biggest single cattle market in Scotland was held in Crieff, but this in turn gave way to Falkirk.

This switch led to many of the cattle drovers from the South West Highlands taking more southerly routes than before, leading through Helensburgh and Lomond. Most droves were making for Falkirk, but a number were bound for Carman.

A number of routes led through Arrochar. An alternative was simply to make for Tarbet, and head down by Loch Lomondside to Balloch.

Main roads were to be avoided, not just because of toll charges. The cattle were usually shod for long treks, and the hard bottoming of roads was sore on the hooves and legs of the beasts.