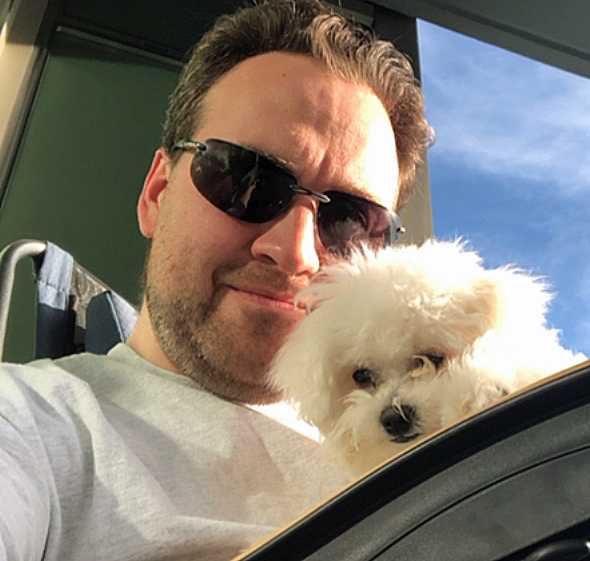 A YOUNG pupil at Helensburgh’s Lomond School had his mind on games as well as studies . . . and it paid off.

Dr Luke Dicken, who turned 37 on December 8 and is now based in the heart of downtown San Francisco, California, is one of the world’s leading experts in developing games using applied artificial intelligence.

The family moved to James Street, Helensburgh, when he was eleven, and Luke had just a short walk along Stafford Street to school.

He said: “My mom was a computer programmer way back in the days of punch cards, so I’ve always been surrounded by technology.

“I’ve played video games since before I could talk, I think, and I got my first computer, a Sinclair ZX Spectrum, as a birthday present when I was about six years-old.

“When I was a teenager I started playing a game called Creatures, which was an ‘Artificial Life Simulator’.

“When I looked at it, it became evident that the folks who made it had spun out of the University of Cambridge and that there was a huge amount of real science behind these cute little animals that you could train and breed.

“That sparked my interest in artificial intelligence in general.”

He went to Edinburgh University in 2001, where he was a keen member of the PC Gaming Society, and he graduated with an honours BSc degree in Artificial Intelligence and Computer Science in 2006, adding an MSc in Bio-Infomatics the following year.

“The University of Edinburgh is in some ways the European birthplace of AI,” he said. “I got to be trained by some of the pioneers in the field — the equivalent of having Crick or Watson as your undergraduate lecturer.

“For a while I focused on more theoretical aspects of AI before realizing that practical applications were more my speed. I started focusing on robotics for a short time, and then gradually transitioned into ‘simulated environments’ which brought me back to games.”

From 2008-16 he studied and researched at Strathclyde University in Glasgow, gaining a Master of Research degree with distinction in Automated Planning for Autonomous Systems and then a PhD in Artificial Intelligence for Games.

One of his projects was the Strathclyde Poker Research Environment, a tool to enable research into the game of poker, with an emphasis on allowing ease of development of an artificial intelligence player.

He remains one of the principal members of the Strathclyde Artificial Intelligence and Games research group.

Luke was the founder of the Helensburgh-based Robot Overlord Games, a now defunct small studio focusing on contract AI for the games industry.

From 2011-14 he was director of the International Games Developers Association Scotland, when his responsibilities included community organisation, enhancing developer relations and coordinating events.

In 2013-16 he was the first person outside North America to serve as a director of the worldwide association, the world’s largest non-profit membership organisation providing a global network of collaborative projects and communities for individuals who create video games.

From four years he was a mentor of the GameMentorOnline programme, run by Women in Games International, for established professionals or those with more specialist knowledge, to share their experience with those who are coming through.

The company, which is valued at nine billion dollars, states that its mission is “connecting the world through games.”

Luke’s current post is director of applied artificial intelligence, and he describes his job as leading a team to develop innovative products and systems at the intersection of Data, AI and Creativity.

“We’re best known for games like Farmville, Words with Friends, and our most recent big-name title is Harry Potter: Puzzles and Spells,” he said.

“We have offices and subsidiaries around the world including London, Brighton and Birmingham, but also Finland, Turkey, India, Canada and numerous offices in the US. I work from our headquarters.

“Over the years I’ve held a number of titles, including running our Central Analytics team. Now I am responsible for our research and development projects around AI, and particularly focused on forward-looking ‘moonshot’ type projects.

“My team has built out a particularly innovative technology platform to support this effort, filed for eight patents around this technology and in October we launched ‘Spell Forest’ for Apple and Android phones, which is the first game to leverage the technologies that we’ve built.

“As director, my role is to set the vision, lay out a lot of the innovation in the architecture, craft a plan for proving our hypotheses and get the company’s executive team aligned with our needs, and then manage the day-to-day execution against that plan.

“I’m also liable to need to jump into the weeds to solve specific problems as well as this more upwards-facing work. It’s an intense role, but one I feel uniquely well qualified for!”

He is also the chairman of the International Games Developers Association Foundation, a charitable sister organisation which focuses on supporting the mission of the IGDA through work in areas including education and research related to game development.

“I was a recipient of a number of awards that the Foundation gives to promising students working towards roles in the games industry,” he said. “That started my involvement with the organisation, and in 2014 I replaced the founder as chairman.

“In the six years I’ve been running the charity, we’ve been able to grow by an incredible rate — 750 times the budget we had initially, and to hire staff.

“We’ve been able to directly support over 500 individuals involved  in the games industry and numerous organisations around the world in our effort to make a more inclusive and diverse industry.”

Luke was named one of Develop (now MCV) Magazine’s 30 Under 30 for 2013, which recognises the top 30 ‘Rising Stars’ of game development. In 2018 he topped the Innovation Exchange’s Most Influential in Video Game Analytics List.

Before moving to the United States he was a very enthusiastic member of the Royal Northern and Clyde Yacht Club at Rhu, helming a Gareloch One Design yacht, no.1 Luna, for twelve years with his father Peter — who owned a large cruising boat — being the crew.

He said: “Sailing was a bit of a rebellion for me, and it got me out on one of the Gareloch One Designs that Lomond School owned at the time.

“The teacher who ran the sailing group left just as I entered S6, and the school made me sailing captain and put me in charge of running Circe.

“I had an absolute blast maintaining her — fairly poorly! — and racing her, also pretty poorly, and when I left school I really wanted to stay involved, so we ended up purchasing and racing Luna.

“I got better at the racing, and my dad helped with the maintenance, and for a few years we were pretty strong contenders for third place in the fleet, almost always finishing behind Gordon Mucklow’s Iris and Charles Darley’s Catriona.

“Having to sell Luna to Julian Forrester was probably one of the harder parts of relocating, and unfortunately in the last six years I’ve not been able to prioritise making free time to get back on the water over here.”

Today, between a demanding day job and running a charity in his free time, Luke does not have a lot of space or energy for outside interests, apart from raising Jaina, his one year-old Bichon Frisé puppy, for the past year.

“I make time for reading — I think I’m on book 64 for this year,” he said. “I still try to make time for games, and they’ve been an invaluable way to stay connected to people throughout the pandemic.

“When I can, I love to make time to cook elaborate meals, just for myself these days unfortunately.”

Two years ago his father and wife Judy moved from James Street to a flat at Water’s Edge in Rhu, and last year they made their home in Haxey, a small town in North Lincolnshire.

However Luke says that Helensburgh is always going to be home to him.

“It might not be where I was born and it obviously isn’t where I live now,” he said.

“But when I think about home, it’s heading to Rhu Marina to pick up some bits and bobs, coming over the Black Hill and seeing down Sinclair Street and over to Greenock, or bar hopping along the seafront — maybe a bit less of that now I’m not in my twenties! I will always be ‘from Helensburgh’.”