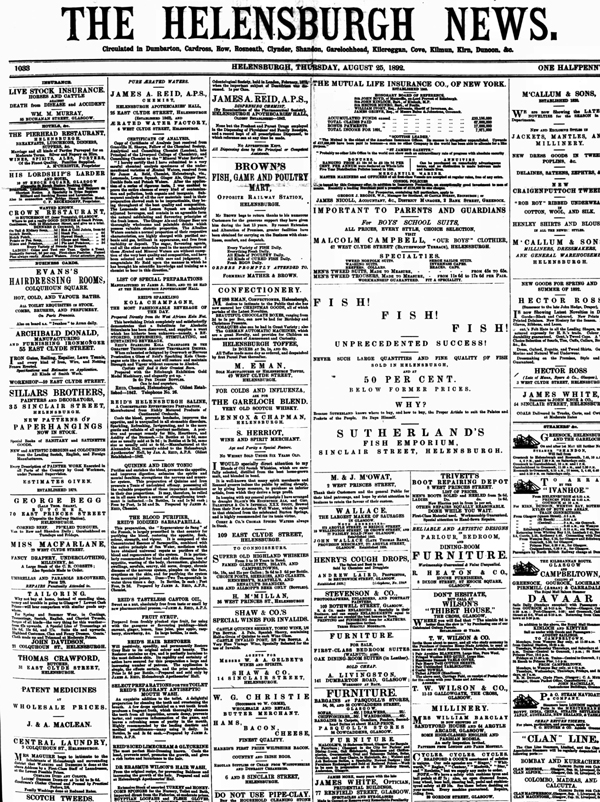 THE FIRST local newspaper covering Helensburgh and district was ‘The Helensburgh News’, which was published from 1877-93, and it is now available online.

It stated on the masthead that it circulated in Cardross, Row (Rhu), Shandon, Garelochhead, Clynder, Rosneath, Kilcreggan, Cove and, surprisingly, Kilmun, Kirn and Dunoon.

Published every Thursday, price one halfpenny, it was hand typeset and printed by Robert Gardner Blair at an office in Princes Street.

It had opposition from 1880, the Helensburgh and Gareloch Times published by Macneur & Bryden in East Princes Street. This lasted until the 1970s.

Then in 1891 they had a free of charge rival, the first Helensburgh Advertiser, printed and published by J.Lindsay Laidlaw at 19 East Princes Street.

It is not known how long this publication appeared, but the printing business was eventually bought by Craig M.Jeffrey who went on to launch the second Helensburgh Advertiser with brother Ronnie.

The British Newspaper Archive, in partnership with the British Library, recently announced that it has added digital images of 626 pages of the Helensburgh News from the years 1877, 1886 and 1892.

The August 25 1892 edition gives a real flavour of local life at the time, with — as always in those days — only advertising on the front page.

One of the largest ads is for James A.Reid, dispensing chemist, at Helensburgh Apothecaries Hall at 25 East Clyde Street, with aerated water factory at 6 West Clyde Street.

It begins with a certificate of analysis from a Fellow of the Chemical Society, which spoke in glowing terms of Reid’s Lemonade, Lemon Squash, Ginger Ale, Ginger Beer, Double Soda and Potash Waters.

No contamination or pollution was found, and the drinks were of the best quality and composition. The report ended: “I congratulate Mr Reid upon the manner in which he has brought his scientific knowledge and training as a chemist to bear in this direction.”

Next the ad features Reid’s Sparkling Kola Champagne, prepared from the West African Kola Nut, and claimed to be the most fashionable beverage of the day and “the greatest triumph amongst temperance drinks”.

Mr Reid is also offering hair restorer which will “positively, speedily and permanently Restore Grey Hair to its original colour and beauty”.

He went on to have a lemonade factory in James Street, now a garage, and lived at Hilsrig (now Inistore), 58 James Street.

Another well-known name from the past, Miss M.Eman of 49 West Clyde Street, the sole manufacturer of Helensburgh Toffee, is advertising that she has now received her Christmas Goods, including Beautiful Chocolate Boxes.

She also offers the German Automatic Machines “which are a great novelty and provides for children an immense amount of Amusement and Curiosity”.

For adults there is the Gareloch Blend Very Old Scotch Whisky for colds and influenza, sold by Lennox & Chapman, Helensburgh.

Recovery might also be aided by a visit to Evans’s Hairdressing Rooms in Colquhoun Square for hot, cold and vapour baths.

A local business which turned out to be long-running was W.G.Christie, 6 and 8 Sinclair Street, wholesale and retail butter merchant. He sold cream from Wigtownshire, as well as finest quality hams, bacon and cheese.

Fish! Fish! Fish! Unprecedented Success! was the slogan of Sutherland’s Fish Emporium in Sinclair Street, which sold fine quality fish at 50% below former prices because the Proprietor knew where to buy.

Turning to the inside pages and news, the Police Court was of course reported. Bailie Whyte heard that Catherine O’Hara or Cleary, a widow, was charged with having been drunk and incapable.

She acknowledged her offence, and on promising to take the pledge for six months, she was allowed to go.

John McManus, a gardener living in Grant Street, pled not guilty to entering the garden at Ardlui House, 5 East Montrose Street, and stealing a large quantity of fruit and flowers.

After a trial he was convicted and fined 20 shillings, with the option of going to jail for ten days.

Described as a “vagrant dosser”, James Mitchell, a labourer on tramp with no fixed place of residence, was found asleep in the stables occupied by Andrew Neilson, baker, without having leave to do so. He was fined 10 shillings, with the alternative of 5 days imprisonment.

In other news the Harbour Trustees had purchased a 40 feet wide Union Jack flag to be flown on the flagstaff near the pierhead.

It was prize day on the sail training ship Empress moored in the Gareloch off Kidston Point, with the boys dressed in their holiday attire.

Ladies and gentlemen came from all over the West of Scotland to be present at the ceremony, and Captain Deverell put the boys through various exercises.

The Shandon choir enjoyed their annual trip to Inverbeg, while at Garelochhead it was decided to erect a 12 feet high white granite cross in the Free Church grounds in memory of John MacDonald of Belmore and Torlochan, who died at Windsor aged 40, “in affectionate remembrance of his many excellent qualities and the noble example of his manly and blameless life”.

On the sporting front a Helensburgh team called Victoria opened the Scottish Junior Football Alliance season with a visit from Campsie Black Watch, and they won 3-1.

At Ardencaple Park visitors Barlinnie Cricket Club declared at 94 for nine. Helensburgh replied with 32 for five before time was called.

Luss Highland Games attracted a very large attendance including ‘many of the county gentlemen’. One of the highlights was the tug of war between teams of ten men, one from the police and the other from heavyweight contestants — eventually the police won.

The ninth annual Cove and Kilcreggan Regatta took place, with commodore Peter Donaldson on board the steamer Lady Clare, and music on land from the instrumental band of the 1st R and D Artillery Volunteers.

A lot of the news items related to Glasgow, and even further afield, as did many adverts. Two columns were devoted to Chapter 22 of a serial entitled ‘The Blacksmith Baronet, A Story of Real Life’, by R.T.Casson.

Foreign news was also covered, including “Terrible loss of life in Japan”, an account based on a telegram from San Francisco reporting that the Occidental and Oriental Company’s steamer Gaelle crew had heard of enormous loss of life by typhoon, landslip and earthquake.

A three-day typhoon led to a mountain landslide, many people were drowned, and hundreds of dwellings swept away.

Dense fog in the Clyde resulted in a shipping disaster, a collision between the Isle of Man steamer Snaefell on route to Ardrossan and the Norwegian schooner Kaleb, on route from Archangel to Dublin with a cargo of timber.

The Snaefell eventually reached Ardrossan, while the badly damaged Kaleb was towed to Greenock.

The fourth and last page consists entirely of adverts, almost all from Glasgow and Edinburgh businesses, many of them for remedies to treat a wide variety of diseases and other complaints.