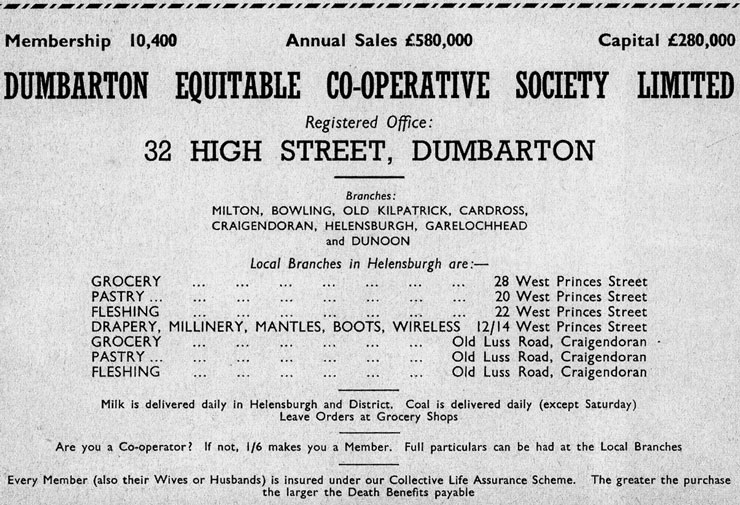 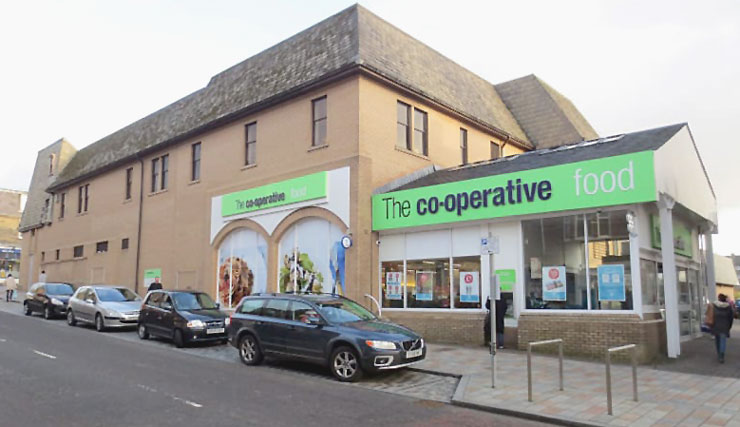 In 1861, a group of some 60 Dumbarton housewives came together with a view to setting up a co-operative store there. There were many setbacks and the whole scheme seemed likely to founder until a benefactor provided a gift of £200.

This enabled the vision to become a reality, and DECS was born. At the end of the first year of business in Dumbarton, turnover was £900 and profits amounted to £55.

The basic idea behind the co-operative movement was that registered customers were in effect shareholders, and they were entitled to a portion of the profits if any, known as the dividend or ‘divi’.

Accounts were dealt with on a quarterly basis, with details being recorded in a share book. The dividend paid out corresponded to the profits for the quarter, and it amounted to between 1/6d and 2/6d in the pound pre-decimalisation.

If profits were good, an extra bonus might be forthcoming. In days gone by, when it was often difficult for families to make ends meet, the ‘divi’ could well mean the difference between solvency and insolvency.

The Dumbarton store became a considerable success, growing from strength to strength over the next 30 years.

This all changed, however, when a bitter feud arose over the choice of general manager, resulting in a breakaway group which set up a rival enterprise, known as the Lennox Co-operative Society.

These societies are not to be confused with the Vale of Leven Co-operative Society, which was a separate entity.

The Dumbarton split lasted until the First World War, when the Lennox Co-op went out of existence.

Given the shareholder structure of the Co-op, the organisation, along with its customers, was perhaps particularly vulnerable to the fortunes of the marketplace.

This was clearly revealed in the Great Depression of 1929-36. A place like Dumbarton, with its strong reliance on industries such as shipbuilding and whisky distilling, was hit very hard.

Many people became unemployed, spending power was reduced, and the ‘divi’ was minimal. However, the ledgers record that £500 was given by the organisation for distribution to the poor, underlining its commitment to the community.

The Co-op has always prided itself on what could be termed social responsibility.

At an early stage in the history of Dumbarton Co-op, a Women’s Guild was set up — not to be confused with the Church institution.

This aimed to foster confidence and a range of aptitudes and abilities at a time when many believed that a woman's place should simply be in the home. Classes were run in subjects like self-sufficiency, and social events were also organised.

As well as the Guild there were other endeavours such as the Co-op choir and courses in elocution. Insurance services and funeral provision were offered. There was staff development too, well before the era of day-release at college.

With the end of the Depression it was possible to look ahead with optimism, and there was much to celebrate.

At a meeting of DECS in the Victoria Halls, Helensburgh, in 1938 it was revealed that the society was one of 230 sister organisations in Scotland supported by the Scottish wholesale Co-operative Society, founded 1868.

Not only had DECS a number of branches in and around Dumbarton itself, but it also had stores operating in many other communities.

It was believed that the society had the largest geographical spread in the country.

Having survived bombing damage in World War Two, the Co-op in Dumbarton proved to be a pioneer in a number of ways.

In the wake of post-war housing scheme developments, many traditional customers found themselves living well away from town centre shops. In response to the criticisms, branches were built in the schemes, often at considerable cost — the Castlehill branch cost £50,000.

The 1960s represented an era of optimism in the Co-op, and the High Street. This was the time of the slogan "It’s all at the Co-op now", replaced in the mid-1970s by "Your caring sharing Co-op".

With the 1970s however the winds of change began to impinge on the Co-operative movement. 1973 saw the merger of the Scottish Wholesale Co-operative Society with the Manchester-based Co-operative Wholesale Society, partly because of difficulties in the SCWS Bank.

From the 1960s onwards pressure on the Co-op began to steadily build from a number of quarters, including competition from supermarket chains, and the growth of car ownership which gave customers the mobility to shop far and wide.

In a bid to keep abreast of the market, local Co-ops were modernised in Dumbarton, Vale of Leven, Helensburgh, Cardross and Garelochhead in the 1990s, but the competition made rationalisation inevitable.

In 2001, DECS became part of the CWS Group, resulting in branch re-structuring and closure in a number of cases. Further rationalisation took place in 2005 when the Co-op Group announced the planned closure of 36 Department and Home Stores.

On the other hand, a number of new stores were opened, but the net effect was that several local communities — including Cardross and Garelochhead — lost their Co-ops.

When the Helensburgh branch of DECS was set up in 1892 it was at 19-21 Sinclair Street. By 1907 a move ‘up the hill’ had taken place, although only as far as 64A Sinclair Street. Part of the business was now also run from 5 East King Street.

By the end of the First World War business seems to have prospered, as expansion had taken place into 62 and 64 Sinclair Street.

The expanded premises may not have matched the Society's ambitions, because by 1921 the move had taken place to 20-28 West Princes Street, with the store being housed in William Tait's fine tenement built in 1878.

By the start of the Second World War the range had developed so that the shopper could start with Drapery and Boots at nos.12-16, move on to Dairy and Bakery at no.20, continue to no.22 where the Fleshers were located, and could finish with Grocery and Provisions at Nos.26-26. Clothing and Millinery were to follow in due course.

It was at this time that the Old Luss Road branch was opened. The store succeeded in winning a secure place in the retail heart of Helensburgh, a success which stretched through the war and beyond.

A fascinating insight into the workings of the Co-op during what might be termed the ‘classic age’ of shopping is to be found in the late Pat Drayton's book "Trading Places".

At that time it was very much a case of counter service with an appropriate staff complement, and selling commodities such as butter and cheese provided the staff with an opportunity to display their skill in serving customers from a bulk resource.

The portion was typically removed from the stockpile with some panache — and with not a single plastic wrapping in sight.

As the sixties arrived, a few clouds began to appear on the horizon.

The first supermarket in the town was opened in 1966 when William Low set up shop in what had been Spy's Sinclair Street coal yard, now occupied by Tesco.

This was a decade of change with the onset of the era of self-service and from 1969 the discontinuation of the time-honoured dividend book, when trading stamps were brought in nationally.

The next two decades saw the pressure intensify on department stores like the Co-op, one result being that in 1992 the Scottish Co-op/CWS announced plans to build a superstore on the seafront. Two years later, after a public inquiry, the plan was turned down.

The Co-op was not the only group seeking to build a superstore at the seafront, a pressure which continues to this day — but a massive lobby against the use of the seafront for such a purpose developed.

The 1990s programme of refurbishment of branches by DECS led to an application by the Helensburgh branch in 1997 for alteration of the shop frontage and extension of retail units so that the store would take in nos.8-28 West Princes Street.

There was a substantial increase in the range of household goods, including many electrical products.

Following the assimilation of DECS into the wider co-op movement in 2001, the grocery and provision side was dropped at West Princes Street,and the 2005 rationalisation saw the ending of another chapter in the history of the town.

As the chapter of the West Princes Street store drew to a close, the Co-op supermarket moved into the Sinclair Street site. In place of the dividend book and the successor stamps came the credit card and now contactless payment.

However, the tradition of customers as shareholders continues, as does the principle of social responsibility. The plastic carrier bags were claimed to be Britain's first such bags to be completely bio-degradable, and the claim is that Co-op toiletries and household products have not been tested on animals.

What then does the future hold? Whatever happens, one thing is clear: the Co-op remains one of the oldest retail businesses in the burgh. The oldest still in existence is R. & A.Urie, China Merchants, at 45 West Clyde Street, which was founded by 1889.