That burgh status might be within their grasp was thanks to the General Police and Improvement (Scotland) Act of 1862.

Previously, any community wishing to apply for burgh status had to constitute a “populous place”, this being based on a minimum population of 1,300 qualifying residents. However, the 1862 Act reduced this to 700, placing Cove and Kilcreggan on a much more favourable footing.

The ensuing campaign to bring about burgh status was motivated principally by the need for better roads and pavements, especially at the main road by the shore, and the 1862 Act provided for exactly this kind of need.

It also permitted the luxury of burghs being able to ‘cherry pick’ only those clauses in the Act that were deemed appropriate. Thanks to a skilfully handled and well-choreographed approach, burgh status was gained in 1865, with adoption of the sought-after clauses.

More detail on this and what followed can be found in local man Richard Reeve’s book “A Victorian Burgh: the Story of Cove and Kilcreggan”, which was first published in 2005.

By 1880, the Burgh Council began turning its attention to the idea of a public water supply, encouraging by the Estate landowner, the Duke of Argyll.

Some years earlier, he had let it be known that he would look favourably on any such scheme, and that he would not only make available land free of charge, he would also subscribe £500 to the project.

A preliminary survey was carried out by Glasgow-based chartered engineer William Copland, a much-respected figure, and some years later, he helped carry forward a water supply scheme for the village of Garelochhead.

He identified a site at Dhualt Burn as being a favourable location for forming a reservoir, but he stressed that more investigation would be needed.

Later in 1880, a more detailed survey was carried out on behalf of Messrs Wharrie, College and Brand, chartered engineers, of Glasgow, who looked at five sites, and produced a report with costings.

The Town Council, known as the Burgh Commissioners, sifted through the findings and decided to put two options to the Duke: the Dhualt Burn and Lochan Ghlas Laoigh, the latter being a hill loch, known for centuries as hosting a population of that handsome fish, the perch.

The Dhualt scheme offered a much more central location than its rival, which lay to the north of Coulport, and had much else besides in its favour. The Duke however recommended the Lochan Ghlas Laoigh option, the crucial factor being the altitude.

A reservoir at Dhualt would have lain at a height of around 200 feet, while the Lochan was some 540 ft above sea level. Both would require to be gravity fed, and while the Dhualt scheme would have reached most existing homes, it would not be able to service future housing further uphill, an ambition of the Estate.

Lochan Ghlas Laoigh was chosen, and the first sod was cut by Provost Clarke on November 22 1881, a little to the east of Kilcreggan Pier.

The event has been immortalised in the truly historic photograph above, remarkable not only in its recording of a landmark event, but also for its portrayal of a broad swathe of the society of the day, combined with good representation of both sexes, and featuring quite a few children.

With typical Victorian efficiency, the opening ceremony of the completed works took place in July 1882, and it was performed by the Duke of Argyll. Perhaps appropriately for such a scheme, the day was very wet, so wet that some dignitaries, including Mr Crum-Ewing, Lord Lieutenant of the County, were unable to attend.

As with the campaign to gain burgh status, the process leading to the introduction of the water supply was handled with considerable skill. 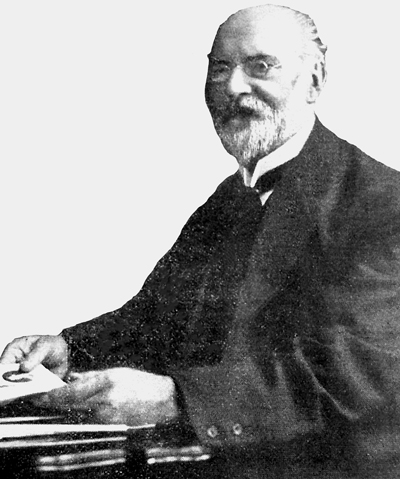 One person who may well have been key to this success was William McCracken (right), the local schoolmaster. A man whose free time appears to have been fully given over to public service, he acted as town clerk for a very nominal salary, and he was also collector of rates, among other duties.

His advice was always sound and well-reasoned. He continued to fill the role of town clerk until 1916, after running up a total of 51 years in post — a remarkable record.

The total cost of the works as contracted was £8,700. The water filters were of sand. The winter population of those coming under the scheme was calculated as around 860, but in summer 2,000.

The scheme was not brought about under the Police Act of 1862, although the water clauses of that Act had been adopted by the Burgh of Helensburgh in 1866. Instead the mechanism employed by Cove and Kilcreggan was by the Public Health (Scotland) Act of 1867.

This seem to have stemmed from considerations of cost, and the move was a very astute one, perhaps fitting in with the Duke’s wishes.

If some areas beyond the Burgh — known as landward areas — were included in the scheme, costs could be shared out among a wider population base.

It was a promising situation in that a good many people outside the Burgh would stand to gain a reliable water supply, in return for their support. The disadvantage was that two local authorities would require to be consulted: the Burgh Commissioners, and Rosneath Parochial Board.

Parochial Boards were founded in 1845, their role being the administration of the Poor Law, but over time they were given additional duties.

The 1867 Act had made them also responsible for matters like water supply, and landward areas — typically villages — could seek to constitute what was termed a Special Water Supply District.

Row, now Rhu, gained that status in 1870, this being the gateway to provision of a public water supply.

Whether within or beyond the Burgh, the essential challenge was to win over the support of ratepayers — the so-called “£10 a year men” — as they were the ones who would be footing the bill for the scheme. This was accomplished, seemingly without any real difficulty.

The resulting scheme included not only the residents of Cove and Kilcreggan, but quite a number of those in the landward areas as well.

In his annual report for 1891, the county medical officer of health calculated that some 80 households beyond the Burgh, representing about 400 people, were among the beneficiaries of the new water supply.

Places like Coulport, Peaton, the Gasworks, various farms along the Barbour Road, High Kilcreggan, Portkil and even Rosneath Home Farm, all enjoyed the new amenity.

Rosneath House, or Castle, was not included. There is an old reservoir up on Gallowhill, so perhaps the big house was supplied from there. The Clachan of Rosneath and Clynder were not included, and they would not have a public water supply until well into the 20th century.

The new water supply appears to have served its purpose well. Naturally enough, as with any water supply, there were from time to time issues such as water leakages, but insufficiency of water seldom seems to have been a real problem, unlike many surrounding areas.

As well as providing a water supply for domestic and commercial use, the Town Council saw to it that a good many public drinking fountains were provided as well, with most being along Shore Road. At least one iron lamppost, as at Kilcreggan Pier, combined its prime function with that of drinking fountain.

Eventually, however, the modern world began to exact a toll. In 1963, if not before, it became known that with the planned coming to Faslane and Coulport of the submarine-based Polaris defence system, a massive increase of the infrastructure would be required.

As part of the planning, it became clear that an increased water supply would be necessary. It was decided that a water pipeline be laid, taking water to the area from Loch Sloy.

As far back as 1906, planners had set their eyes on this remote place north of Arrochar. One of the attractions to water engineers was the massive rainfall — over 150 inches a year.

The ancient Burgh of Dumbarton had by the early 20th century a public supply of water, based on reservoirs in the Kilpatrick Hills, but with ongoing growth, Loch Sloy was viewed as capable of securing its future needs.

In its ambitions, the Burgh found itself pitted against Dumbarton County Council, which also had its eyes on Loch Sloy, and the plans of 1906 had to be set aside as a result.

In the early 1940s, the County Council found itself up against a much more formidable rival in the shape of central Government, which had conceived of a plan to use Loch Sloy as the site of Scotland’s first major hydro-electric power scheme.

In early 1945, a public enquiry found that the hydro scheme should go ahead, and it was reported that “the opposition of Dumbarton County Council did not carry much weight”.

However, despite this setback, it seems to have been accepted at some point that water could be abstracted from the loch for water supply needs, if found necessary.

In 1963 that Dumbarton County Council, working in consort with the Admiralty, called in this concession, with plans to lay a water main from Loch Sloy to the Gareloch area.

In October of that year, the Helensburgh Advertiser reported that as part of the plans, the Admiralty envisaged a branch pipeline to the Rosneath Peninsula.

Candidly, if chillingly, the article claimed that the water would be used for local supply only if there was nuclear contamination of Lochan Ghlas Laoigh.

But it was not until the end of September 1967 that the 12-inch mains from Loch Sloy came into use. It carried enough water for Arrochar and Tarbet, the Admiralty depot at Glen Douglas, Faslane and the Gareloch, as well as the Peninsula. Costs were shared between the County Council and the Admiralty.

By that date, however, the era of joined up water supplies was on the agenda, and since then, water supply has developed to the stage where the water itself can be drawn from a variety of sources. Loch Sloy continues to provide water to the network.

With the arrival of the Trident defence system in the 1980s, Lochan Ghlas Laoigh was brought within the orbit of RNAD Coulport, and it is many years since it last featured on the register of water supply reservoirs and lochs.