WHEN the then Royal Yacht Britannia — carrying the Queen Mother — entered and left the Gareloch in May 1968, she made a suitably majestic sight. But it was not quite so majestic in December 1954 when another royal yacht arrived at Faslane.

The Helensburgh Heritage Trust website often receives requests from researchers for information and/or images, which quite often leads to undiscovered gems of local history, and an inquiry from Mike Keulemans did just that.

He said: “I am writing a definitive history of the Royal Yacht Victoria and Albert III, and I would be grateful for your help.

“She was broken up at the British Iron and Steel Corporation’s yard in Faslane between 1954 and 55 and I am wondering if there are any press cuttings, photographs or other memories of the ending of her life there.”

Happily the Helensburgh and Gareloch Times edition of December 8 1954 provided the answers, and this is the report . . .

ROYAL YACHT ‘VICTORIA AND ALBERT’ TO BE BROKEN UP AT FASLANE

Despite the beautiful setting with the sun shining valiantly out of a brilliant blue sky, it was a saddening sight on Monday to see the old Royal Yacht, Victoria and Albert, passing from the river into the Gareloch heading for Shipbreaking Industries’ headquarters at Faslane Dock where, like so many other famous ships, she is to end her chequered career.

Even short of her figurehead and triple masts she was still one of the most graceful ships ever seen in this nursery of great and beautiful ships.

Fitting Naval honours were accorded the venerable yacht as she was gradually and pathetically towed through the placid waters of the Gareloch past the Headquarters ship of the Reserve Fleet, HMS Jupiter.

The Victoria and Albert had just made the voyage under tow from Portsmouth where she has been kept in a state of care and maintenance for the past eight months, and where the most valuable pieces of her furniture were transferred to her successor, the Britannia, and also to Buckingham Palace; while the remainder has gone to the Admiralty’s furniture store at Deptford.

Designed by the then Director of Naval Construction, Sir William White, the Victoria and Albert was laid down in December 1897, and built at Pembroke Dockyard, at a cost of over a million pounds.

She was not, however, built in the orthodox manner and launched from a slipway, as is usual.

She was, instead, constructed in a dry dock and, when completed, the dock gates were opened to float the yacht; but, unfortunately, due to some miscalculation or other, instead of remaining on an even keel the yacht heeled over and fell on her side.

This mishap delayed the yacht’s completion, and as a result she was not commissioned until July 1901, six months after Queen Victoria’s death.

Internal alterations had been made to provide more convenient facilities for the Queen, hoists were substituted for stairs, for instance, but, as events turned out, Her Majesty was never on board the vessel.

The V & A, as she was affectionately called, was the third ship to bear this name. She was never a good sea boat, but notwithstanding that, she did all that was asked of her.

In the years that have passed since her commissioning the Royal Yacht has cruised all over the world with our own Royal Family and Princes and Potentates of many lands as guests of our Sovereign. In 1907 alone, she steamed some 12,000 miles.

Extended cruises were, however, infrequent, although she could travel 2,500 miles without refuelling. The last notable cruise was when King George V sailed to the Mediterranean during his convalescence.

Previously she had taken King Edward VII to Reval in 1908 when he met the Czar, and after that Queen Alexandra had gone with her on a Norwegian cruise.

The Victoria and Albert for many years was the most outstanding feature of Cowes Week where she was regularly to be seen prior to the war.

With a hull constructed of teak with clipper bows elaborately decorated with gilt work, the Royal Yacht was a most graceful ship which will be long remembered by those interested in the sea and ships.

It may be stated there is no question of souvenirs of any description being available for the public, as we are given to understand that Messrs Shipbreaking Industries Ltd. have given a specific undertaking that no souvenirs will be fare or distributed.

That concluded the report, but it is very likely that a good few souvenirs may be found in local homes to this day, and Mike Keulemans agrees.

He said “The Ship’s Log in the National Archive at Kew gives considerable detail about the much-contested decision whether or not to scrap the yacht.

“On July 25 1954 the Flag Officer Royal Yachts told the Commander-in-Chief Portsmouth that King George VI had been reluctant until a replacement was started, and it was he who wanted no materials to be used to make souvenirs for sale.

“This was written into the contract with the shipbreakers. It was stated that the Queen only wished souvenirs to be given to those with a personal connection with the ship.  Even the firm of Waygood-Otis, who had constructed the lift, were only allowed their little plaque.”

The 380-feet 4,700 ton V & A, which had a ship’s company of 336, was withdrawn from serving the royal family in 1937 and decommissioned in 1939. She served as a depot ship during the Second World War, as an accommodation ship to HMS Excellent, and after the war was moored at Whale Island near Portsmouth.

Although there were plans for a new yacht to be built, these were suspended because of the outbreak of the Second World War. 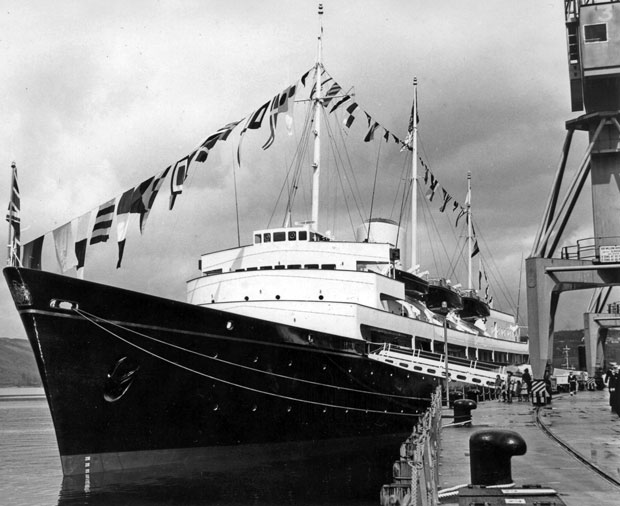 Eventually Her Majesty’s Yacht Britannia (pictured right at Faslane) came into service, and she was used by the royal family from 1954-97. Now she is a major visitor attraction at Edinburgh’s Ocean Terminal in Leith.

After Faslane being a military port in the war, at the end of 1945 the southern section was handed over to the Royal Navy who used it as a base for the Reserve Fleet. In August 1946 the rest was handed over to Metal Industries for shipbreaking.

Many famous vessels ended their days here, including the last four-funnelled liner, the Aquitania, the German battleship Derflinger which had been scuttled at Scapa Flow, and the last battleship built for the Royal Navy, HMS Vanguard.

It had a colourful multi-national labour force including Poles who had come to Britain during the war and Hungarians after the failed 1956 revolution against the Communist government.

For all other ships, souvenirs and other items were usually available for purchase, and I can remember as a boy climbing around the dark interior of an aircraft carrier which was about to broken up.

In the early days of the Advertiser after it moved to East King Street, owner Craig Jeffrey purchased what seemed like eminently suitable office furniture and cupboards from the yard.

It was only when the items were delivered to the office that it was discovered they had been built for sloping decks, not flat floors, and were tilting! However a local joinery firm soon solved the problems.

The Government decision to build a base for nuclear submarines at Faslane spelt the end for the yard as the land was needed, but they continued breaking up ships — and old steam locomotives — until 1980.