The Scottish slate industry was much overshadowed by its Welsh counterpart, though the primary centres of the industry about Ballachulish and the Slate Islands, of which the most important was Easdale, enjoyed a certain amount of prominence.

The lesser quarries have, however, jaded in the mists of time, hidden in the depths of solicitors’ boxes are the company histories and buried in the hillside bracken are the quarry holes of hopeful speculations. The bracken clad hills above Luss on the banks of Loch Lomond hide one such group of early quarries, principally those to the south about Camstraddan but also immediate to Luss and the more recent workings of Auchengaven.

The slate worked about luss was a continuation of the important Aberfoyle Slate, worked extensively in the area of that name in the wilderness of the Trossachs. Though only about a mile wide, the slate belt about Luss attracted attention for its easy access to water for bulk transport to Glasgow via the River Leven. No doubt such a convenience overcame the problems of working a much faulted area, with bands of grit that divided up the area still further.

Geologically the area about Camstraddan probably proved the easiest to open up and its working dated from the early 18th. century. The principal quarry was The Trough, a long scraping into the hillside running S.W. from above the road. The greyish blue to green tinted slates were exposed in 5 or 6 benches, each up to 80 ft. in height and varying from 90 to 120 ft. in width; cleavage dipped S. 30° E. at a slant of 60° to 70°.

Other local and aged workings were the so-called Level Quarry and that of Creag na Bodach. The Purple Quarry which was so-called from the colour of the slate lay nearby, with a face up to 30 ft. high and opened up over 40 ft. or so, with a cleavage dipping 30° E. of S. at 70°.

North toward Luss was the Craig na Gaibhre Quarry and about the hills above the village were a group of old quarries long worked out. In the hills beyond lay Auchengaven, worked into this century and showing blue, grey and greenish slates with crushing along a fault line. 1 But the concern of this article is the older workings and some notice may now be given to aspects of the area’s early exploitation.

Robert Colquhon of Camstraddan was the lord of the manor and mid 18th century leases suggest a settled quarrying community with slates being transported out via Loch Lomond and the River Leven. 2 The lease offer of 1769 included a boat for taking of slate down the loch, 3 possibly solely to the mouth of the Leven or as far as Dumbarton where there was a well established agency run by the McLachlan Family. 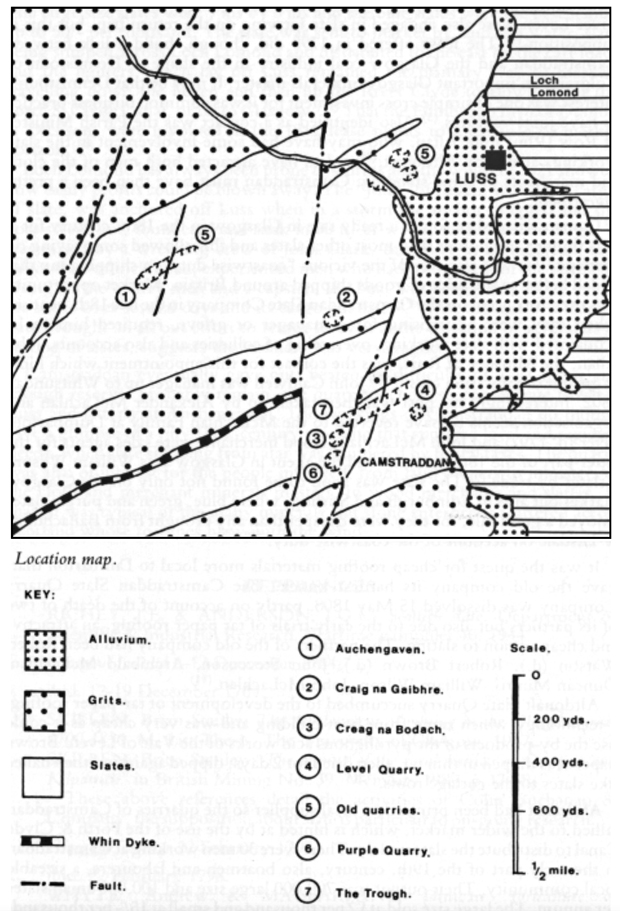 It is possible that the coal lighters of Colin Buchanan & Company of Watehills, near Faifley, that ventures up the River Leven were also engaged in slate ferrying on the return trip, but this is supposition. 4

The lease offered in 1798 did, though, build a link between Camstraddan and the Glasgow coal industry in the shape of Dennistoun of Colgrain, an important Glasgow minerals master. It may be that Dennistoun’s interest was one of simple cross investment for it was common business practice to have joint ventures. 5

Also identified as a contact was the Parish Minister of Row [Rhu] John Allan, who may have had some involvement in the slate workings at nearby Altdonalt, 6 and to have attracted both men of the cloth and merchants of some standing; Camstraddan must have then been a pretty investment.

Camstraddan slate found a ready sale in Glasgow in the 18th century for it was thinner and lighter than most other slates and this allowed some saving on carriage. 7 It was also free of the vicious 'coastwise duty', a shipping tax that added heftly to the price of goods shipped around Britain.

Market opportunity was therefore good for the Camstraddan Slate Company in the late 18th century when they were advertising for a manager or grieve, required him to be acquainted with slate working, overseeing of collieries and also accounts.

John Allan, the Minister of Row, was the contact for this appointment which hints at greater organisation on site; 8 John Caldwell was manager up to Whitsunday 1802. Interestingly his post was then taken up by Alexander McLachlan and organisation seems to have reverted to the McLachlan Family at Dumbarton.

Peter (d.1797) and John McLachlan, wood merchant, were sales agents for the latter part of the 18th century and the agent in Glasgow was William Wilson, a slater by trade. 9

The slate was soon to be found not only on the Glasgow market but also in Edinburgh and Stirling, where blue, green and purple slates enjoyed a good sale, for they were cheaper than any brought from Ballachulish or Easdale on account of the coastwise duty. 10

It was the quest for cheap roofing materials more local to Dumbarton that gave the old company its hardest knock. The Camstraddan Slate Quarry Company was dissolved on 15 May 1808, partly on account of the death of two of its partners but also due to the early trials of tar paper roofing, an attractive and cheap option to slating.

Altdonalt Slate Quarry succumbed to the development of tar-paper roofing, a technology which came from boat building and was very cheap as it could use the by-products of the pyrolignous acid works of the Vale of Leven. Brown paper was dipped in thin tar, then dried for two days, dipped again and then nailed like slates to the cottage roofs. 12

Altdonalt had been primarily a local supplier so the quarries of Camstraddan rallied to the wider market, which is hinted at by the use of the Forth & Clyde Canal to distribute the slate widely.

There were 30 men working at Camstraddan in the early part of the 19th century, also boatmen and labourers, a sizeable local community. Their output was 700,000 large size and 100,000 small slates per annum. The large size sold at £2 per thousand and small at 15/- per thousand.

The large size slates were 9 ins by 6 ins and the blue slates were the best selling up to 50/- per thousand. The slate was sent to market by land and water, slate being shipped across Loch Lomond and distributed to the east by the cart load.

But the lighters which lay off Luss remained the primary way to market, travelling down the Leven and then up the River Clyde to Bowling for the Forth & Clyde Canal, or on to Glasgow. 13 That the Edinburgh firm of Dunlop & Dickson, were involved in the 1811 lease points to a distance of market horizon. 14

Loch Lomond has always been prone to storms and the winds of 1821 showed how easily profits could be blown away.

The “John” of Leven, with a full cargo of slate, was anchored off Luss when in a storm the anchor dragged and the boat swept out, foundered and sank in 60 ft of water, with the slate cargo. It was raised by a wrecking crew of John Clark, carpenter in Dumbarton, and James Barr of Inchinnan, experienced men who had contracted for the purpose.

Using all the quarry men and a capstan, the boat was hauled out 600 ft on to the shore over several days and its cargo got safe. 15 That the loss of a load of slate brought an all out effort to rescue it, even at the cessation of several days cutting of slates, suggests the business was very fragile.

Camstraddan eventually gave out, beaten by difficulty of local access and though reserves probably remain, the quarriers chose to concentrate towards Luss and latterly at Auchengaven.

The workings of Camstraddan do though give a glimpse of a tiny 18th century working that supplied local and regional needs, when slate shipping from afar was hampered by brutal taxes. The quarry was also of interest for the people involved, from land owners to ministers of the cloth and merchant minerals masters, to wood merchants and slaters.

In that, it was typical of the many minerals and stone enterprises scattered across Scotland whose fortunes blew with the wind.

4. SKILLEN, Brian Stanley The development of mining in the Glasgow area, 1700-1830. M. Litt Thesis. The University of Glasgow, 1987. SKILLEN, Brian Stanley “The mining of the rural districts of Campsie and Kilpatrick” in British Mining No.39. Memoirs 1989. p.37-38. These above references detail the activities of Colin Buchanan & Company, the supposition about slate is particular to on-going research.

This article was written in 1990 by Brian S.Skillen of Glasgow, and was originally published by the Northern Mine Research Society. It is reproduced here by kind permission of both Mr Skillen and the Society.