The Trustees have pleasure in presenting the report together with the financial statements for the year ended 31 March 2020.

The charity is Scottish Charitable Incorporated Organisation (SCIO). It was registered in its current legal form on 18 May 2016. It was previously a company limited by guarantee (no SC16377 ) and also a registered charity with the same number as at present (namely SC024603). The assets of the company limited by guarantee were transferred to the SCIO automatically on 18 May 2016. It has a single tier structure and as such the trustees are members of the charity.

The board, which normally meets several times each year, are the charity's trustees. Membership of the board is open to all members.

Trustees are elected at the annual general meeting, and the board has the power to co-opt other trustees. There must be a minimum of 5 and a maximum of 10 trustees.

The Trustees of the Helensburgh Heritage Trust continue to promote the objects of the Trust in a variety of ways and to build on the successes of previous years.

The Aims and Objects of the Trust are  :

To enable the Trust to fulfil its Objectives the Trustees meet regularly throughout the year to consider matters ranging from the stewardship of the Trust’s finances and assets, the provision of a winter programme of speakers on a range of subjects, to the provision of visual displays highlighting aspects of local culture and heritage.

The Trust holds and maintains a wide collection of documents and artefacts, which are catalogued and stored in suitable lock-fast premises in Helensburgh Parish Church. This store is likely to be available to the Trust for the foreseeable future at modest cost and the Trust is appreciative of the Church’s generosity in this regard.

For the most part documents and articles in the Trust’s care have been donated or loaned to the Trust (appropriately recorded) while from time to time modest purchases are made of items which become publicly available. Potential purchases are always discussed and agreed by Trustees in advance and funds are designated for such opportunities.

In the course of the winter of 2019-2020 five public meetings were held at Helensburgh Civic Centre and were well attended. A sixth and final meeting, scheduled for the end of March 2020 had to be cancelled because of the restrictions on movement imposed by the Scottish Government because of the Covid19 outbreak.

The Trust established an agreement with Argyll & Bute Council to have use of display areas and cabinets in the public areas of the Helensburgh & Lomond Civic Centre. For most of the past year there have been two exhibitions on display here – one on the history of the Royal Northern and Clyde Yacht Club and another telling the religious story of Helensburgh and district. Together with continued use of display areas in the Helensburgh Library, this facility has enabled the Trust to enhance its visual presence.

An invitation was received to consider involvement in a proposed new culture and heritage centre in Helensburgh. However, after careful consideration, it was decided by the Trustees that the scope, terms and conditions of the proposal were such that the Trust could not make the necessary commitment to the project at this time.

The Trust also provides an excellent website (www.helensburgh-heritage.co.uk) which carries news, views and a large collection of articles and photographs, together with links to other websites of local interest.  Regular communications and queries come from around the world to the Trust through the website. The website has recently been revamped to improve its usability for a greater variety of devices and the capacity of its photo gallery has been increased.

The current level of reserves is several times normal annual expenditure, and the board considers this to be healthy. The policy of the board is to maintain such a level of reserves so that, if an object of heritage importance to Helensburgh appears for sale on the market at short notice, the Heritage Trust has sufficient resources to buy it – and in the past there have been instances of this.

Plans for the Future

No major changes in activities are contemplated.

As recommended by the Office of the Scottish Charity Regulator, the trustees have considered whether to introduce any new practices with regard to safeguarding. However the Heritage Trust has no staff and does not work specifically with vulnerable beneficiaries or volunteers. Where the Heritage Trust has been involved with schoolchildren in the past, this has always been in the presence of their teachers. Consequently the trustees believe that there is currently no need to introduce procedures for safeguarding, but will keep the situation under review. 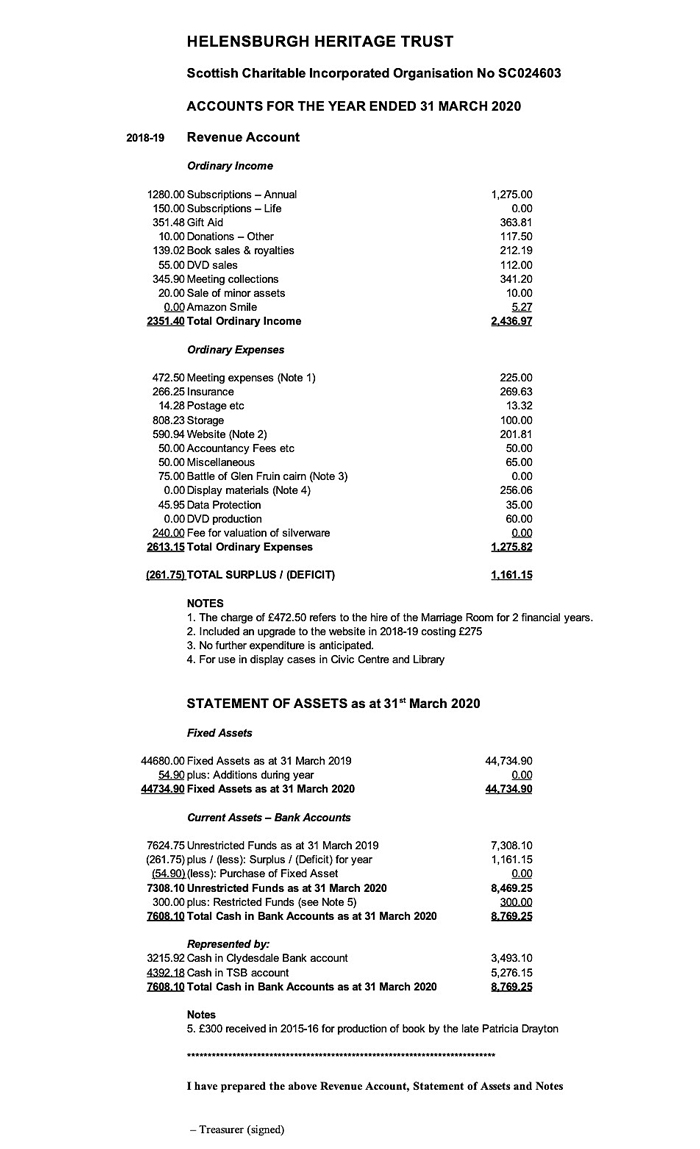